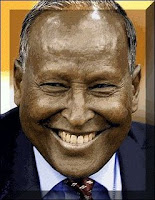 Survived Somali President Abdullahi Yusuf of mortar fire attack on his home in his capital Mogadishu, hours after his return after trips abroad. The assistant asked him not to disclose his name, told "Reuters" that the four missiles fired at the car the presidential palace, and three of them fell outside, with shells and one at home, no one was injured, and reported that Yousef was in the presidential compound in the very guard at the time bombing. (Reuters)
Posted by Unknown at 7:46 AM