The elders of Merca town of middle Shabelle region have intensely rejected reports by Terrorist Yusuf Indha Adde who announced that a new administration would be set up for the town following officials of the city’s administration were killed in roadside bombings by unknown groups. In a news conference they held today

the elders of Dir tribe that hail from lower Shabelle region have described Indha Adde’s remarks as “ force occupation” once again in the region. Abdi Nor who is the secretary of Dir tribe has noted that Indha Adde was not familiar with justice by the residents of the region as well he wanted to seize the region by forces using the name of the Islamic courts union. Mr. Nor has urged the al-shabaab fighters in the region to handle this issue of hawiye (CAYR)Terrorist yusuf Indha Adde. sked about whether they meant that accusation remarks to support Sheikh Sharif he said that wold talk on that later after tribal consultation. Indha Adde has acknowledged in Merca town that the he would establish aTerrorist administration for the town soon saying that he would fight against anyone who oposes that administration..Mostly somalian Terrorist are from Hawiye tribe (al-shabaab) The leadership is mostly sub-clans of Hawiye (Habar Gidir clan) With The Exception Of ONLF own hassan turki(http://en.wikipedia.org/wiki/Hasan_Hersi_)Abu Mansur a foot soldier from al-Qaedahttp://en.wikipedia.org/wiki/Hawiye http://en.wikipedia.org/wiki/Habar_Gidir has been at war since 1991, The Horn of Africa nation has been plagued by chaos and clan-based civil war since HAWIYE Warlordism". , TERRORISM. PIRATESM ,TRIBILISM Replaces the Honourable Somali President Mohamed Siad Barre administration .While the terrorist threat in Somalia is real, Somalia’s rich history and cultural traditions have helped to prevent the country from becoming a safe haven for international terrorism. The long-term terrorist threat in Somalia, however, can only be addressed through the establishment of a functioning central government
Warlord Addresses Lower Shabelle Residents http://allafrica.com/stories/200811040641.html
sheikh sharif lands in central town 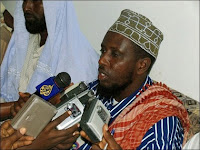 carrying Sheikh Sharif Sheikh Ahmed, the chairman of alliance for the reliberation of Somalia and delegates landed in the central town of Beledweyne, according to officials.
Sharif flew out from Jowhar town where he was currently staying to push for Djibouti peace deal.
Hundreds of UIC soldiers are on the streets of the town to provide the security of the sheikh and the delegates with him.
We shall keep you posted if any details on the rrival of Sheikh Sharif
Posted by Unknown at 11:10 AM