Washington, DC--The U.S. Department of the Treasury today designated three members of al-Shabaab, a violent and brutal extremist group in Somalia.
"Today's action targets three leaders of al-Shabaab, an al Qaida-linked terrorist group that uses lethal tactics to undermine peace and civil society in Somalia," said Adam Szubin, director of Treasury Office of Foreign Assets Control. "These terrorist commanders have had direct involvement in the kidnappings and cold-blooded murders of numerous Somali officials and civilians and they should be cut off from the world's financial system."
Al-Shabaab has used intimidation and violence to undermine the Somali government and threaten civil society activists working to bring about peace through political dialogue and reconciliation. It has claimed responsibility for shooting Deputy District Administrators in Somalia and for several bombings and shootings in Mogadishu targeting Ethiopian troops and Somali government officials. more..http://www.ustreas.gov/press/releases/hp1283.htm
ISSA OSMAN ISSA
AKA: MusseAbdullah BurAbdullah AttoAbdala SudaniAfadey DOB: 1973POB: Malindi, KenyaNationality: Kenyan
http://www.globaljihad.net/view_page.asp?id=496 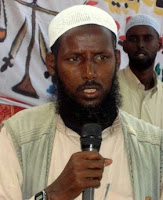 Somalia, the forgotten failed state across the border, has stirred international interest once again but for all the wrong reasons as usual. Its lawlessness has spilled over to the sea where, from January alone, more than 80 international freighters have been attacked, 33 of which ended up hijacked.Several others, including the Saudi-owned super-tanker, one of the world’s newest and biggest oil freighters with a consignment worth Sh7.8 billion captured on Sunday, remain in pirates’ greasy hands. There is also the Ukrainian ship hijacked in September with deadly military hardware, which Kenya claimed she was importing, but which the international community believes was headed to Southern Sudan.The gunmen are lured into the dangerous game of Russian roulette in the sea by the multi-millions unlucky shipping companies appear enthusiastic to willingly and discreetly pay-off in exchange for their freighter and cargo. The waters are vast and the naval ships patrolling the Gulf of Aden, even as the European Union mobilises heavier and stringent presence to clear the red-marked sea routes, are spread out too thin. The waters under focus spread over a million square miles. It does not help matters that apart from the weak-kneed government inland, the pirates use sophisticated weapons and strike on speedboats http://www.eastandard.net/InsidePage.php?&id=1143999845&catid=16&a=1

Al-Shabaab (Somalia):
- State Department Designation as Foreign Terrorist Organization (Added 3/18/08) The State Department announced that it has designated the Somali Islamist group Al-Shabaab as a Foreign Terrorist Organization. According to State, "Al-Shabaab is a violent and brutal extremist group with a number of individuals affiliated with al-Qaida. Many of its senior leaders are believed to have trained and fought with al-Qaida in Afghanistan. Al-Shabaab has used intimidation and violence to undermine the Somali government and threatened civil society activists working to bring about peace through political dialogue and reconciliation."
- State Department Fact Sheet on Al-Shabaab (Added 3/18/08) This fact sheet provides information on Al-Shabaah's leadership and its "pre-existing terrorist linkages." State reports that Al-Shabaab leader Aden Hashi Ayrow: "Trained with al-Qaida in Afghanistan prior to 2001. Issued statements praising al-Qaida leader Usama bin Laden, inviting foreign fighters to participate in 'holy war' against Ethiopian and Ugandan forces in Somalia, and linking Somalia to al-Qaida’s global operations." Another Al-Shabaab leader Ahmed Abdi Godane "trained and fought with al-Qaida in Afghanistan" and is "implicated in the murders of Western aid workers in Somaliland in 2003 and 2004."
Issa Osman Issa et al. (Somalia):
- U.S. Treasury Department Designation: Specially Designated Global Terrorist (Added 11/20/08) In designating three leaders of the Somali Islamist group Al-Shabaab, Treasury noted that a "number of al-Shabaab members are affiliated with al Qaida, and many of al-Shabaab's senior leaders are believed to have trained and fought with al Qaida in Afghanistan." Significantly, one individual designated -- Issa Osman Issa -- holds a leadership role in al-Shabaab and previously "was one of the operatives who fired the surface-to-air missiles used in the failed 2002 attempt to shoot down an Israeli airliner in Mombasa, Kenya. Issa was also involved in the planning of the near-simultaneous attack in 2002 against the Paradise Hotel in Kikambala, Kenya, in which a vehicle-borne explosive device struck the hotel, killing 12 and injuring 40."
Posted by Unknown at 12:33 AM