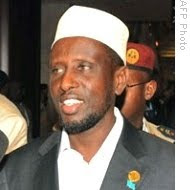 (RTTNews) - Clashes between Islamist insurgents and government forces in Somalia's capital Thursday killed at least 20 people, mostly civilians, reports quoting witnesses said.Moderate Islamist President Sheikh Sharif Sheikh Ahmed escaped an attempt on his life while he was leaving for an African heads of state conference in Uganda to sign the first ever convention to protect displaced people. Three mortars fired towards the airport did not reach near the plane carrying the president to Ugandan capital, Kampala.African Union peacekeepers and government troops responded by shelling insurgent strongholds of Mogadishu's main market and residential areas. Bodies strewed the streets in the southern districts of Howlwadag, Hodan and Wardhigley, the BBC reported. More than 55 injured civilians were hospitalized. Islamist insurgent groups al-Shabaab and Hizbul Islam are waging a war in southern and central parts of Somalia to overthrow President Sheikh Sharif Ahmed. Sharif Ahmed's government of national unity, which replaced a fragile Somali transitional government earlier this year, faces the task of ending Somalia's more than a decade-old civil conflict.The militant groups have vowed to topple the UN-backed government in Somalia, alleging that it is too close to the West. The insurgency, combined with drought, has left millions of Somalis dependent on food aid and fleeing the country. Many of the militants turned to piracy, attacking international ships off its coast.For comments and feedback: contact editorial@rttnews.com
Somali rebels shell prez jet, 30 dead
http://timesofindia.indiatimes.com/world/rest-of-world/Somali-rebels-shell-prez-jet-30-dead/articleshow/5150747.cms
Posted by Unknown at 4:16 PM