Somali Prime Minister Omar Abdirashid Sharmarke says his country is a haven for al-Qaeda and the terrorist group is using his country to train, regroup and plan further attacks.
Prime Minister Sharmarke, addressing the Royal Institute of International affairs at Chatham House in London, says the situation is beginning to threaten regional stability. The Somali PM told the gathering, "we cannot be certain of the precise size of their presence in our country but al-Qaeda here, they are training and planning in our land. Somalia is serving as an ideal place to them to regro 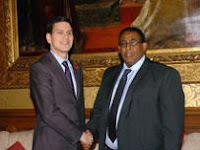 up and redeployed". Mr Sharmarke compared the situation in the East African country to Afghanistan in the 1990s, saying Somalia does risk of being taken over by al-Qaeda. Large swathes of Somalia are under the control of the al-Qaeda-inspired Shabab organisation group and other militant Islamist groups allied to it. Mr Sharmarke said defeating the insurgency was important not only to his country but the whole world, adding that the insurgency is spreading and is starting to threaten regional stability. The prime minister said a purely military response would not work, "an insurgency needs chaos, discontent and poverty, we must take that away," adding that strong government and regeneration was needed to provide an alternative.source rnw.
Posted by Siad barre at 2:55 PM