Even Somalia’s supposedly moderate government is loth to protect them 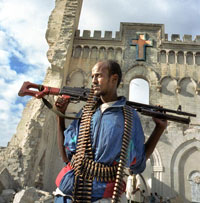 WHERE is the hardest place in the world to be a Christian citizen? North Korea, perhaps? Saudi Arabia? Try Somalia. There are thought to be no more than a thousand Christians in a resident population of 8m people, with perhaps a few thousand more in the diaspora. The Islamist Shabab militia, which controls most of southern Somalia, is dedicated to hunting them down.

Christian men attend mosques on Fridays, so as not to arouse suspicion. Bibles are kept hidden. There are no public meetings, let alone a church. Catholic churches and cemeteries have been destroyed. The last nuns in the smashed capital, Mogadishu, were chased out in 2007. The year before, an elderly nun working in a hospital there was murdered. The only Christian believers left are local Somalis.

Catching and killing them is useful propaganda for the Shabab, not least for indoctrinating its young fighters and suicide-bombers in the belief that America, Britain, Italy, the Vatican, along with Ethiopia and Kenya, are all “crusaders” trying to convert Somalis to Christianity. The UN lurks nefariously behind. Israel, of course, is also doing its bit to undermine Islam.,,more..http://ow.ly/wzJx