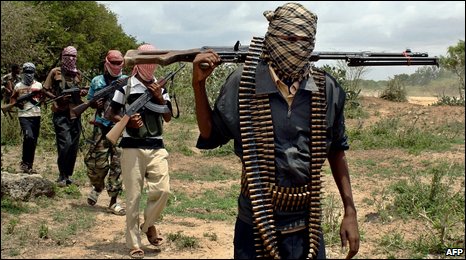 The BBC's Mohamed Dore reports on a rare road trip out of Somalia's capital, Mogadishu, into territory run by Islamist militants.

The first thing I notice when I head out of Mogadishu is the number of roadblocks.Most of war-ravaged central and southern Somalia is now controlled by al-Shabab, an Islamist group which the US believes has links to al-Qaeda.Yet their fighters are not completely in control; I see roadblocks run by three different groups as I head to Agfoye, a town 29km (18 miles) north-west of Mogadishu.Despite intense and bloody battles, the government is still in charge of parts of the capital and they run the first checkpoint where passengers have to pay them money to carry desperately needed goods in and out of the city.Then just a little further along I come across the first checkpoint manned by al-Shabab, the very secretive but well-organised militia at the centre of the conflict in Somalia.They do not collect money but they check goods and search people.Not far from this checkpoint is another run by al-Shabab's supposed allies, Hizbul-Islam.Earlier this month, the two groups fell out over the southern port of Kismayo - and Hizbul-Islam was driven out of the city...To read the rest of the piece.news.bbc