In Somalia, a New Template for Fighting Terrorism , U.S. weighs getting involved in Somalia

In Somalia, a New Template for Fighting Terrorism 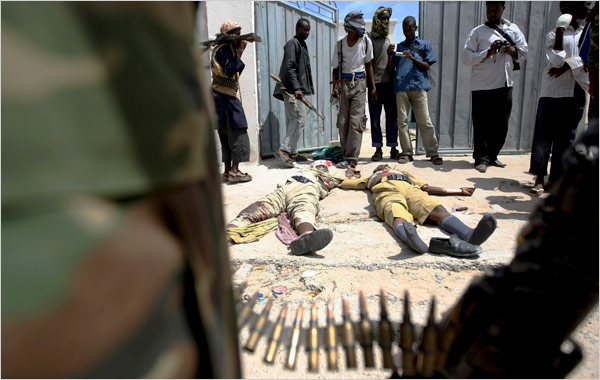 ANARCHY Two policemen lay dead last July. But a new government may now have an interest in allowing attacks on

Somalia isn’t just a nagging geopolitical headache that won’t go away. It is also a cautionary tale. Few countries in modern history have been governmentless for so long, and as the United States has learned, it would be nice to think you could ignore this wild, thirsty, mostly nomadic nation 7,000 miles away. But you can’t.

Qaeda is working feverishly to turn Somalia into a global jihad factory, according to recent intelligence assessments, and the way the United States chooses to respond could serve as a template for other fronts in the wider counterterrorism war. Just last month, American helicopters swept over the dusty Somali horizon to take out Saleh Ali Saleh Nabhan, a wanted Qaeda suspect who had been hiding out in Somalia for years and training a new bevy of killers; some of those trainees are believed to be Somali-Americans who could easily slip back into the United States and do some serious damage as suicide bombers.

In a way, the daring daylight strike against Mr. Nabhan, which was supposedly part of the Obama administration’s shift from targeting terrorists with cruise missiles that often kill civilians, was a flashback. Few in Somalia — or the American military — have forgotten Black Hawk Down, the battle in October 1993 when Somali militiamen in flip-flops killed 18 American soldiers, including members of the Army’s elite Delta Force. It was a searing humiliation for the Pentagon, which had just emerged from the first gulf war pumped up on smart bombs and laser-guided missiles, but in Somalia found itself back in a Vietnam-style quagmire where high technology was no match for local rage...more..http://www.nytimes.com/2009/10/18/weekinreview/18gettleman.html?_r=1&partner=rss&emc=rss