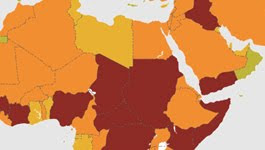 The 10 states that fill out the top ranks of this year's Failed States Index -- the world's most vulnerable nations -- are a sadly familiar bunch. Shattered Somalia has been the No. 1 failed state for three years running, and none of the current top 10 has shown much improvement, if any, since FOREIGN POLICY and the Fund for Peace began publishing the index in 2005. Altogether, the top 10 slots have rotated among just 15 unhappy countries in the index's six years. State failure, it seems, is a chronic condition.
At the top of the list, Somalia saw yet another year plagued by lawlessness and chaos, with pirates plying the coast while radical Islamist militias tightened their grip on the streets of Mogadishu. Across the Gulf of Aden, long-ignored Yemen leapt into the news when a would-be suicide bomber who had trained there tried to blow up a commercial flight bound for Detroit. Afghanistan and Iraq traded places on the index as both states contemplated the exit of U.S. combat troops, while already isolated Sudan saw its dictator, Omar Hassan al-Bashir, defy an arrest warrant from the International Criminal Court and the war-ravaged Democratic Republic of the Congo once again proved itself a country in little more than name.
Even good news for these plagued states came tempered by hard facts. A coalition government in Zimbabwe whipped history's second-worst bout of hyperinflation, fostering the country's first year of positive growth in more than a decade, and Sri Lanka crushed its Tamil Tiger insurgency. But Robert Mugabe's security goons still rule Harare unchecked, while the Sri Lankan government stands accused of committing gross human rights violations.
Given time and the right circumstances, countries do recover. Sierra Leone and Liberia, for instance, no longer rank among the top 20 failing states, and Colombia has become a stunning success story. Few remember today that the Dominican Republic once vied with its neighbor Haiti for the title of "worst Caribbean basket case." But the overall story of the Failed States Index is one of wearying constancy, and 2010 is proving to be no different: Crises in Guatemala, Honduras, Iran, and Nigeria -- among others -- threaten to push those unstable countries to the breaking point.

In the Beginning, There Was Somalia