A few days ago, the illegal rulers of the lawless state Somaliland undertook a farcical round of elections of their own, whereby the undemocratic, totalitarian procedures reflected some of the worst practices attested in neighbouring Abyssinia (fake Ethiopia). While the results are being falsified for a couple of days, before a false figure is given in their "official" announcement, numerous pieces of news about the chaotic situation that prevailed during the farcical electoral process are coming from various parts of the ill-fated territory controlled by Rayaale’s gangsters.

Sool, Sanaag and Cayn (pronounced Aa-een) represent a sizeable part of Somalia’s northern territory, which has been a matter of dispute between the pseudo-states Somaliland and Puntland that constitute the epicenter of the Somali problem. An effort to setup an autonomous pro-Somali Unity state there lasted only several in 2007 – 2008, and then failed. More on the subject:

http://www.buzzle.com/articles/the-maakhir-state-of-somalia-an-insightful.html
http://www.buzzle.com/articles/laasqoray-the-maakhir-harbour-in-northern-somalia.html
http://www.buzzle.com/articles/somalia-a-german-abducted-maakhir-in-stability-and-somaliland-in-disarray.html
The entire area reflects some of Islamic times’ most glorious pages of Somali History, and the traditional social hierarchy, the elders of the tribes, totally revile the shameful regime of Hargeisa. They and the entire population of the region defend the historical values of the Somali Nation against the Hargeisa regime which remains in place only due to the support and the involvement of the racist, Anti-Somali, Anti-African and Anti-Islamic regime of the Amhara and Tigray gangsters of Abyssinia.

Concerning the Sool, Sanaag and Cayn Somalis, I noticed a recent insightful elaborated by the Somali political analyst and commentator Nasr Ibn Othmann; I herewith republish it integrally.

Somalia and the Honourable People of the Sool, Sanaag, and Cayn Regions

'That which does not kill us makes us stronger'

Firstly, let me express my solidarity with the honourable people of the Sool, Sanaag and Cayn regions of Somalia. These people have been treated quite appallingly, in recent years, by the puppet regimes in both Puntland and Somaliland. To make matters worse, the rather thuggish Ethiopian state is now attempting to achieve its nefarious desired objectives directly in North-Western Somalia by extremely violent means, as was the case in recent massacre in the border town of Buuhoodle. There can be no doubt that the Ethiopian regime, in Addis-Ababa, is pursuing a divide and rule policy with respect to the entire Somali peninsula. The Ethiopian state, as has been demonstrated time and again, has no regard for the truly awful consequences of the manifestly anti-Somali policies which it consistently chooses to pursue. Indeed, the shedding of Somali blood is an integral component of the long-term objectives of the Ethiopian state to depopulate the Somali national territory of both the Somali people and their ancient culture.

The honourable Somali people of the Sool, Sanaag, and Cayn regions have courageously thwarted both the evil designs of the brutally extreme Ethiopain army—and its associated militia—and the dastardly plans of the secessionist Somaliland regime of Dahir Riyaale Kahin in Hargesa by refusing to participate in the sham elections of this month. 1 The secessionists of Somaliland seem to believe that they shall somehow benefit materially from supporting the profoundly anti-Somali elites of the Ethiopian state. However, by attempting to violently destroy the legitimate interests of the people of the Sool, Sanaag, and Cayn regions, the secessionists in Hargeisa only draw themselves deeper into the malignant sphere of influence of racist Ethiopia.

I call upon the leadership in both Puntland and the secessionist enclave of Somaliland to respect the right to self-organisation of the honourable Somali people of the Sool, Sanaag, and Cayn regions.

This includes the right to organise their own economic affairs without fear of extortion or violent intimidation by the wicked security apparatus of the Ethiopian state and its puppet regimes inside Somalia. At the present moment in time, far too many so-called Somali leaders are all too ready to go out of their way in order to serve the best interests of the Ethiopian state; 2 and too often at the absolute expense of the Somali people. This must stop. Far too often, people such as the hopelessly weak and ineffective prime minister of the ghastly TFG of Somalia—Cumar Cabdirasiid Cali Sharmaarke—have made statements which condemn the people of the Sool, Sanaag, and Cayn regions simply because—in the eyes of such so-called leaders of modern Somalia—to oppose the Ethiopian state is considered to be something wrong and unthinkable. This is a great pity. I, for one, am deeply disappointed by anyone who can claim to be a leader of the Somali nation whilst simultaneously serving the best interests of the beast Meles Zenawi!

Ethiopia is directly responsible for all of the death and destruction that has been the ruin of the Somali republic during the past 21 years. Ethiopia is the prime beneficiary of all anti-Somali policies ever pursued in the Horn of Africa region—by one power or another—for over 100 years. Ethiopia is an illegal entity which is built upon the illegal partitioning of the Somali national territory a long time ago, and we still with the dreadful consequences of this evil act to this day. Not satisfied by this historic criminal act, the modern Ethiopian regime seeks to further divide Somalia, region by region, for their own nefarious ends. Ethiopia is an entity built upon the bodies of many oppressed nations and it is sustained by the spilled blood of all of these nations—not least the blood of the Somali nation! I sincerely believe that the road to freedom, for all of the oppressed and long suffering nations of the Horn of Africa, can be found by all those who are able to emulate the strength and courage demonstrated recently by the honourable people of the Sool, Sanaag, and Cayn regions of Somalia. Only then, with the will of the Almighty—when all of us completely reject the manipulative influences of the puppets currently active in the Horn of Africa and their shadowy handlers—may we find peace. 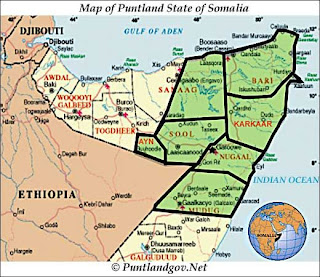