Countering al-Shabab: How the War on Terrorism Is Being Fought in East Africa 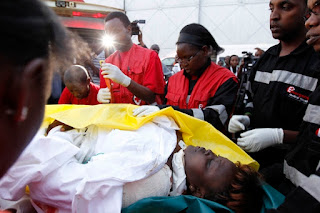 A woman wounded during church attacks in the Kenyan city of Garissa is helped by Red Cross paramedics at Nairobi's Wilson Airport on July 1, 2012


The attack by suspected Islamist militants on two churches in eastern Kenya on Sunday, in which the assailants killed 17 people and wounded 60 more, is more bloody confirmation of the emergence of African terrorist groups. A group of seven masked men threw grenades into the Catholic Church and African Inland Church in Garissa, close to the Somali border, then opened fire with assault rifles. Though no group has claimed responsibility, it is the latest incident after a series of attacks carried out by Islamist militants across Kenya that have killed close to 60 people. The episodes began after Kenya invaded Somalia last September in pursuit of the Somali guerrilla group al-Shabab.

For years Western terrorist hunters have war-gamed a scenario whereby al-Qaeda, pressed in Afghanistan and Pakistan, tries to establish a new staging ground in the Sahara and the Sahel, the band of lawless desert and scrub running east to west across Africa. According to the theory, al-Qaeda would likely try to extend its franchise to three indigenous African groups: al-Qaeda in the Islamic Maghreb (AQIM) in Algeria, Mali and Niger; Boko Haram in northern Nigeria; and al-Shabab in Somalia.
Theory is now becoming reality. After gestating for years, all three groups now present a real threat. Formerly a mostly criminal enterprise kidnapping foreigners for million-dollar ransoms, in the past year AQIM strengthened its arsenal with weapons smuggled out of the collapse of Muammar Gaddafi’s Libya, then piggybacked on a Tuareg rebellion in northern Mali so effectively that it and its fellow Islamists now control a de facto new state. (In a move similar to the Afghan Taliban’s demolition of Buddhist statues, some of the militants have now set about destroying “idolatrous” Sufi shrines in the ancient city of Timbuktu.) In Nigeria, most of Boko Haram’s attacks have a local focus — the security forces, state institutions, churches — but a faction has emerged with bigger ambitions, as it demonstrated with a suicide car-bomb attack on Aug. 26 last year on the U.N.’s headquarters in the Nigerian capital, Abuja, which killed 24 people and injured 115...via Time