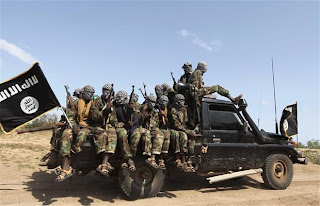 The Treasury Department on Thursday hit six people with financial sanctions for their links to a Somali Islamist group, including two Eritrean military officials.The inclusion of Col. Tewolde Habte Negash and Brig. Gen. Taeme Abraham Goitom, the head of Eritrean External Intelligence, is a warning sign that the United States will sanction anyone suspected of supporting al Shabaab, which the State Department considers a terrorist group. Both Eritrea and al Shabaab have long been in conflict with regional powerhouse Ethiopia, a U.S. ally.“Today, the United States imposed sanctions on six individuals who threaten peace in Somalia,” U.S. Ambassador to the United Nations Susan Rice said in a statement. “These individuals all have links to the terrorist organization al Shabaab, which remains one of the greatest obstacles to restoring stability in Somalia. The sanctioning of two Eritrean military officials underscores the ongoing concern about Eritrea's violations of Security Council resolutions. Thwarting Somalia’s path to peace and creating regional discord will not be tolerated. The United States condemns, in the strongest terms, all acts that further destabilize Somalia and bring harm to innocent civilians.”The individuals' addition to the Office of Foreign Assets Control's list of Specially Designated Nationals blocks their assets and bars Americans from doing business with them.,,H/T The Hill
Posted by Unknown at 4:41 PM