One Last Advice for Sheikh Sharif! 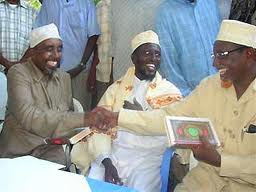 Mr. President: I shall not waste any more energy on you after this, for you have become an unsalvageable grand disappointment for all Somalis anywhere.

As a man, you have proven to be a spineless pipsqueak and a liquid of a man who—in politics—takes the shape of the container he is in. It must be that a providential fate, how unfortunate for you, has Sharif Sakin as a perfect bottle-and-cap for you, from which you shall never escape!


For a brief moment in time, the last 6 months, God has smiled upon you and bless you with better political handlers than you, who elevated you as a statesman. The grip and gravity of Sharif Sakin on you seemed to have been broken. The curse on you was lifted.

How I have marveled, oh, Mr. President, seeing pictures of you—brandishing that little thin mantle of power cane (Ul dhooban oo qurux badan) --- visiting the troops in the newly liberated areas. You were perfect in that role!

You must have missed Sharif Hassan’s hold of you so much; that you would acquiesce to his dictations at the first opportunity which presented itself, even if it meant all the gains for country and people would be put in grave jeopardy, even yet if it meant you would earn the scorn of your people and a dark legacy.

Lad, you could have stood up to this no more than a man, like you and me, and said NO! Better it was for you, and more importantly for the country and the people, to have won with your working team intact or gone down in defeat together! After all, as the president, your decision should have been firmly-based on what was best for the country and people you serve, and not saving your sorry hide!
It was not, never was, about you or Sharif Sakin or, for that matter, Farmajo. It must always be, if Somalia is to stand up again, about the people! Between You, Sharif Hassan and Farmajo, the least contributor to the welfare of the country and its people should have been shown the door.
Whoop-de-do; how lucky for Somalia one more year of you and Sharif Sakin?

Mr. President, if you could only and finally use your God-given balls (Xinniinyo), it is not too late for you to redeem yourself in the eyes of your people. As my president, whose leadership, for better or worse, directly affects me and millions of Somalis, I urge you to do the right thing going forward!

There is one of three good options left for you to undertake to rectify the situation: One, use the people’s voice as a saving grace and reappoint Mohammed Abdullahi Farmajo. Let the Parliament confirm him, as the people’s choice, or reject and
go against the will of the people. The people have spoken, and their voices should not be sidelined. After all, the people should be the ultimate boss of their country.

Two, or you resign and urge and campaign for Farmajo’s appointment as a new president for the one year agreed upon. Three, or with an agreement and blessing of Farmajo, together pick one of Farmajo’s men or women in the cabinet as the new prime minster. The current cabinet should be intact, with no expanding the number 18 of ministerial posts.

The important thing, for the people and country of Somalia, is for what is working to continue. It is for the job, well on its way to a successful completion, to be finished by the men and women who have proven capable!

Confident that the work he started will continue, for Somalia, Mohammed Farmajo could reluctantly go home to his family and old career in the United States!

If, on the other hand, you ignore the will and the voice of the people, by bringing in the old and recycled usual suspects—prime or other ministers of past failed TFGs—then you and Sakin will fall quicker than a house of cards. This the people, with their 20 years of bent frustration, will see to it right through your Villa Somalia windows.

Do the right thing, will you, Mr. President? Turn the table on the Sakin of a Sharif, just once, will you?
Hassan Zaylai, (Political Analyst)  for terror free somalia and WardheerNews
Email: haahzay@hotmail.com