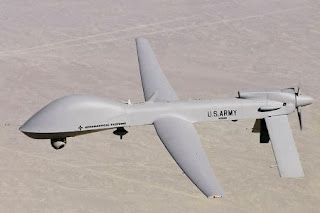 At least 13 Jihadist Al-Shabab linked al-Qa'ida in somalia   have been killed after US  drones launched aerial attacks in southern Somalia near the border with Kenya, . Somali tribal elders, speaking on the condition of anonymity, told local media  that the remote-controlled aerial vehicles fired several missiles at Buzar village, which is located close to El Wak city in Somalia's southwestern region of Gedo , jubbaland region onThursday. They added that dozens of people were also injured in the strikes. The aerial attacks came as US assassination drones had struck Buzar village a day earlier. At least 26 people were killed and dozens more were also wounded in Wednesday's drone attacks. Somalia is the sixth country where the United States has used assassination drones to launch deadly missile strikes. The US military has also used drones in Afghanistan, Pakistan, Libya, Iraq, and Yemen. On October 28, the United States admitted to flying the terror aircraft from a base in Ethiopia. "The US has unarmed and unmanned aircraft at a facility there (Ethiopia) to be used only for surveillance as part of a broad, sustained integrated campaign to counter terrorism," said Pentagon spokesman Captain John Kirby. The confirmation appeared a day after The Washington Post revealed in a report that the US flies “armed” drones from an airfield in Ethiopia's southern city of Arba Minch. Somalia has not had a functioning government since 1991, when warlords overthrew former Honourable Mohamed Siad Barre. Strategically located in the Horn of Africa, Somalia remains one of the countries generating the highest number of refugees and internally displaced persons in the world.

Several killed as allied forces clash with rebel fighters Lower Juba in ,jubbaland region of somalia
At least four people were killed and several others injured after fierce fighting erupted between allied forces of Ras Kamboni, Kenyan and TFG on one side and Al-Shabaab rebel fighters at Kulbiyow, Lower Juba.

The fight started after rebel fighters attacked allied bases in the area, prompting hours-long fight.All those killed are said to be combatants from both sides involved in the fight. The number of injuries is yet to be known.TFG official claimed that they repulsed rebel fighters who attacked their bases. Al-Shabaab also claimed victory in the fight.The two sides also clashed in the area Wednesday night.This comes as Uganda, Kenya and Somalia join hands in fighting the rebel group following a meeting between their head of states in the Kenyan capital, Nairobi on Wednesday.Kenyan troops are set to join the African Union force operating in Mogadishu, alongside Ugandan and Burundian soldiers.About 3,000 members of the Kenya Defence Forces are said to be active in the battle against Al-Shabaab.