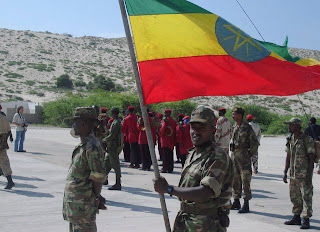 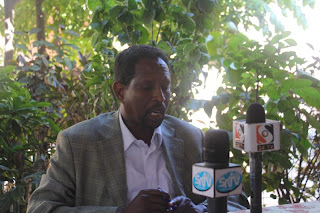 NAIROBI, Kenya - A Somali government spokesman on Monday denied that Ethiopian troops have entered Somalia to help fight insurgents despite several witnesses reporting the movement of troops. Abdirahman Omar Osman said Ethiopian troops would only be welcome if they had an international mandate or a bilateral agreement with the Somali government, but there is currently no such agreement."We believe that they are not in the country," he said "We deny it."But residents of the Somali town of Guriel, about 50 miles (80 kilometers) from the border, said Ethiopians entered their town on Sunday in a convoy of vehicles.The presence of Ethiopia is a delicate matter for the Somali government, which needs all the help it can get to defeat the al-Qaida-linked al-Shabab militia.The Ethiopians could open a third front, stretching the insurgency still further. But the government fears that the incursion by Ethiopia — a Christian-led nation — may hand the insurgents a propaganda victory. Many Somalis were angered by Ethiopia's previous occupation of Somalia."We don't want anyone that could give propaganda for al-Shabab," said Osman. "We don't want any backlash."The government currently only holds the capital with the help of more than 9,000 African Union peacekeepers. Kenyan troops in the south are slowly pushing the insurgents north with the help of government-allied Somali militias but are considered less battle-hardened than the Ethiopian military, which occupied much of Somalia for two years.Ethiopia, which shares a long and porous border with Somalia, entered Somalia in 2006 to chase the Islamic Courts Union from power. The Ethiopians were concerned that the Islamists wanted to expand into Ethiopian territory that is ethnically Somali and the U.S., a strong ally of Ethiopia, was concerned the Islamists were harboring terrorists.The Ethiopian invasion turned into a two-year occupation during which civilians accused the Ethiopian forces of shelling residential neighborhoods and shooting uncontrollably when attacked. The current Somali president, President Sheik Sharif Sheik Ahmed, made his name as an insurgent leader fighting the Ethiopians before they withdrew.The Ethiopians left in 2009 as part of a peace deal that saw Ahmed inaugurated.Somalia has not had a functioning government for more than 20 years. 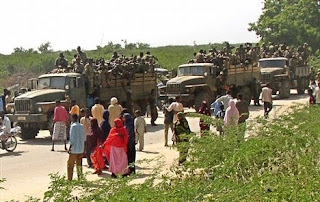 MOGADISHU (Reuters) - Al Shabaab militants have begun pulling out of at least two rebel enclaves in central Somalia after neighbouring Ethiopia sent hundreds of troops across the border, residents said on Monday.Addis Ababa denied on Sunday that its forces had entered yet Somalia, but local residents and elders said scores of Ethiopian vehicles ferrying troops and weapons moved at least 80 km (50 miles) into the Horn of Africa country over the weekend.Local people in Beledweyne and Ceelbuur, both close to the Ethiopian frontier and under insurgent control, said the Islamist fighters had abandoned checkpoints where they used to extort taxes and left their battle stations...moreSomali rebels pull out as Ethiopian troops return

WITNESSES on the drought-stricken Ethiopia-Somalia border have reported that hundreds of Ethiopian troops with armoured personnel carriers, heavy artillery and tanks have crossed into Somalia, opening a new front in an intensifying international offensive against the Islamist al-Shabab militant group.Al-Shabab insurgents are already fighting Kenyan forces in southern Somalia and African Union peacekeepers in the bullet-riddled capital Mogadishu.Somalis say they welcome anyone who can get al-Shabab out, even their historical enemy, the Ethiopians.Read Ethiopian tanks push into Somalia to attack Islamists
Posted by Unknown at 10:18 AM