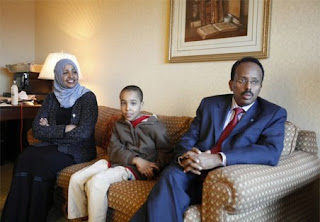 Somalis in the United State are demanding for a direct U.S involvement in stabilising their homeland country, Somalia.Community representatives in Columbus recently met the new U.S. special representative for Somalia, James C. Swan, and asked him to explain the U.S. policy in their homeland.They told Swam that he has an opportunity to make it or break it,” referring to his role in Somalia’s stability.he community appealed to the U.S to provide more humanitarian support to help stabilize the country.The president of the Somali Community Action Network in Columbus, Jibril Mohamed, said whilst the U.S. government can’t dictate to Somalia what the new government will be, they are glad that the U.S government appointed Swan to help lead American efforts to find a solution.After meeting with the Somali community, Swan spoke at Ohio State University’s Mershon Center for International Security Studies; Swan said the transition period for the government must end if the many needs of the Somali people are to be properly addressed.He hopes the transition will conclude with the election of a new president next August.Before he spoke to the community yesterday, Swan met with Somali’s former prime minister, Mohamed Abdullahi Mohamed, who served less than a year and is back home in Buffalo after he resigned early this year.Swan was appointed in August and is based in Nairobi. He went to Columbus to speak with about 60 Somalis.
Posted by Unknown at 11:07 AM