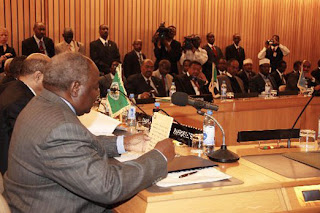 The Intergovernmental Authority on Development (IGAD) summit has called on Ethiopia's government to support Kenyan troops fight against Al-Shabaab militia in Somalia. IGAD head of States meeting in Addis Ababa on Friday agreed on Ethiopia's involvement in the regional effort to fight terrorism, according to a communique read at the close of the meeting."IGAD asked the Ethiopian government to come in and assist peace and stabilisation [efforts] in Somalia," the organisation's executive secretary, Mr Mahboub Maalim, told reporters. Ethiopia's response was positive but guarded. “This is the right time for Ethiopia to consider (the) request,” Ethiopia’s ministry of foreign affairs spokesman Dina Mufti said.“But we still haven’t made a decision yet. There will definitely be a response as soon as possible.” he added. Various reports coming out of Somalia indicate Ethiopian troops have been sighted in Somalia since last week. Ethiopia has downplayed the reports. The summit backed the Kenya Defence Force (KDF) military operation in Somalia and urged support from the international community. The regional leaders observed that the operation, conducted jointly with forces of the Transitional Federal Government (TFG) of Somalia, provided a unique opportunity that must not be squandered so as to restore stability and security in Somalia. 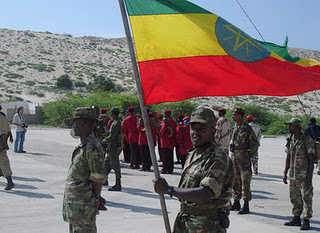 Kenya's President Mwai Kibaki briefed the summit about the ongoing operation and requested all possible
Regional Summit Urges Ethiopia to Send Troops to Somalia moresupport from IGAD member countries and the international community. Regional
IGAD member states call upon Ethiopia to back anti-Al Shabaab operation in Somalia
Posted by Unknown at 11:06 AM