Hitting the beach in Mogadishu after Islamist withdrawal 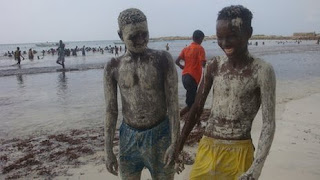 For the first time in years, Lido beach in Somalia's war-town capital, Mogadishu, is packed on Fridays

- a day of rest in the Muslim country - as families take advantage of the improved security to enjoy themselves.

It is a sign of the cautious optimism that has gripped Mogadishu since the militant Islamist group al-Shabab announced a "tactical withdrawal" from the city in August, following fierce battles with the 9,000-strong African Union (AU) force and government troops. 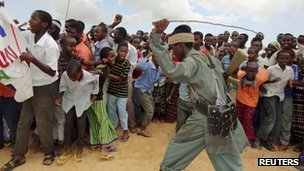 Since taking control of most of the city, which has been devastated by more than two decades of conflict, the AU and the weak interim government have been waging a publicity campaign to urge residents to resume their normal lives. When I visited the beach, hundreds of people were there, playing, swimming or watching a basketball game at a nearby stadium. My house was partially destroyed during the fighting but I am going to repair it”End Quote Ahmed Mohamud Mogadishu residen. "I'm very happy to be here and I say: 'congratulations to my country', one reveller, Mustafa Abdullahi, said.Living in Sweden, Mr Abdullahi was visiting his family in Mogadishu.
"My father is sick but he used to advise me not to come. Now that the situation seems to be improving I decided to come," he said. Somalia's Defence Minister Hussein Arab Isse - who is also one of three deputy prime ministers - was at the basketball game. "It is a truly unbelievable feeling for me to be here, in the middle of Mogadishu, to witness this event," he told the BBC. The optimism is found across Mogadishu, with aid workers estimating that 300,000 people previously displaced by the conflict have returned to their homes in recent months. The city has also seen an influx of people who fled the famine in al-Shabab controlled areas of the south, resulting in more foreign aid workers - including those from Turkey - basing themselves in Mogadishu. Door-to-door salesmen  Residents are renovating bullet-riddled homes and getting together to clean roads and prune overgrown trees. "Thanks to Allah and those who allowed us to come back," said Ahmed Mohamud, a resident of Bondhere district, who had rented a house elsewhere during the conflict. "My house was partially destroyed during the fighting but I am going to repair it." 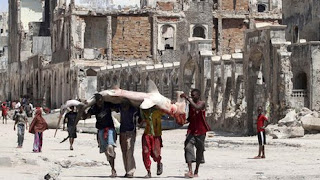 Two decades of conflict has destroyed many buildings in Mogadishu


This has led to a boom in business, with water and electricity companies sending representatives door-to-door to sign up new customers. Some people - like Amina Hassan, a mother of five - cannot afford to renovate her home, but she is determined to live in it."I am struggling, but we are so happy to return to our house," she said. "Step-by-step, things will improve, if peace is gained."AU commanders say they need 20,000 soldiers to secure the city - more than double their current complement of 9,000.The troops are from Uganda and Burundi, with other countries having failed, over the years, to fulfil promises to bolster the force.

Cycling
In the latest promise, neighbouring Djibouti and the West African state of Sierra Leone have offered to send 3,000 troops by the end of the year, while Kenya - which launched military action in al-Shabab's southern strongholds last month - says it is also prepared to contribute to the AU force."In case a request is made, Kenya will avail a few of its battalions [made up of about 1,000 soldiers each] to join Uganda, Burundi and Djibouti to help keep the peace in Somalia," Kenya's Foreign Minister Moses Wetangula told the BBC.Since announcing its "tactical withdrawal", al-Shabab has carried out two major suicide bombings in Mogadishu, killing more than 60 people. The attacks suggest that while al-Shabab is no longer prepared to clash with the better armed AU and government forces, it is continuing to wage guerrilla warfare in the city. One of the explosions took place last month at the busy Kilometre Four crossroads.Despite this, a few weeks ago, I spotted a Turkish aid worker cycling there - a highly unusual sight in MogadishuHe may have been foolish, but it showed that Mogadishu is, for now, mostly peaceful. bbc