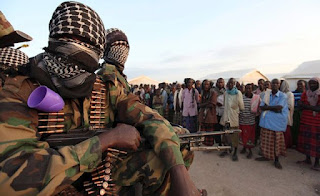 Although Al Shabaab has suffered a number of reversals over the past year, been weakened by internal divisions and lost territory in Somalia, it remains a grave threat to peace, according to a report by the United Nations Monitoring Group on Somalia and Eritrea.

In August 2011, Al Shabaab withdrew its forces from most of Mogadishu, and in October 2011, Kenyan forces, accompanied by a loose coalition of anti-Shabaab Somali militias, entered south western Somalia, securing long stretches of the common border. Ethiopian troops followed suit in November 2011, occupying parts of northern Gedo, and launching cross-border offensives in Bay, Bakool, Hiiraan and Gaalgaduud regions in March 2012. Under sustained military and economic pressure, Al Shabaab has since ceded even more territory, and its leadership seems increasingly divided, which may yet push it to the point of rupture, the Monitoring Group said in its report.

Late last month Al Shabaab militants said they had executed three of their own members for treason, two of them for guiding US missiles to kill fellow militants. It was the first time the Islamist group under pressure from African Union, Kenyan and Ethiopian troops as well as US drone strikes, had admitted to killing its own fighters for betrayals.

Militarily, the report stated that Al Shabaab has generally declined to offer battle to foreign forces, avoiding sustained contacts and relying heavily on asymmetrical warfare techniques. Although the group continues to conduct raids and ambushes with some success in border areas, in Mogadishu its operations have been essentially confined to targeted killings, indirect fire and Improvised Explosive Devices (IEDs), including suicide bombings. Al- Shabaab’s use of IEDs has been growing increasingly sophisticated, and there is growing evidence to suggest that Al Shabaab obtains expertise and/or IED components from outside Somalia.

Al Shabaab’s revenue base has been eroded, particularly through military offensives by the African Union Mission in Somalia (AMISOM), Ethiopia and Kenya. These have deprived the group of control of lucrative taxation centres, including markets and border posts. The Monitoring group said that, Al Shabaab’s single most important source of revenue was the export of charcoal. As a result, in February 2012, the United Nations Security Council passed resolution 2036 (2012), which expanded AMISOM’s mandate, enlarged the size of the force, and banned the import of Somali charcoal. However, the report noted that the main importers of Somali charcoal – notably the United Arab Emirates and Saudi Arabia – have been slow to implement the ban, and as of June 2012 large volumes of charcoal continued to leave the Al Shabaab controlled ports of Baraawe and Marka for markets in Gulf Cooperation Council countries.

The Monitoring Group report said that paradoxically, at precisely the moment that Al Shabaab’s fortunes in Somalia entered a phase of steep - possibly irreversible – decline, the group’s credibility and appeal appeared to be growing among non-Somali extremists. The Somali government says hundreds of foreign fighters have joined the Islamist insurgency from Afghanistan, Pakistan and the Gulf region as well as the United States and Britain. Some have senior positions within Al Shabaab.

“On 9 February 2012, Al Shabaab and Al-Qaeda issued a joint announcement of their formal merger. Al Shabaab has long aspired to a partnership with Al-Qaeda, and several of the most influential non-Somali figures associated with Al Shabaab were alumni of Al-Qaeda operations in East Africa: Fazul Abdullah Mohamed, Saleh Ali Saleh Nabhan, and Abu Talha Al-Sudani. In September 2009, Al Shabaab pledged its loyalty to Usama bin Laden, but received only praise and encouragement in return.

“Al Shabaab’s declared relationship to Al-Qaida is unlikely to result in tangible benefits at a time when both groups are experiencing difficulties. But Al-Qaeda’s endorsement of the Somali extremists may further enhance Al Shabaab’s appeal abroad, and facilitate the forging of relationships with other Salafi-jihadi militants such as Al-Qaeda in the Arabian Peninsula (AQAP) and Boko Haram in Nigeria – both of which have engaged with Al Shabaab in the recent past.”

Other support for Al Shabaab is coming from elsewhere in Africa. In its July 2011 report, the Monitoring Group described in detail the existence of an Al Shabaab support network in Kenya known as the Muslim Youth Centre (MYC). On 10 January 2012, Al Shabaab announced a merger with the MYC and designated MYC ‘Amir’ Ahmed Iman Ali as Al Shabaab’s representative for Kenyan affairs. MYC, which renamed itself Al-Hijra in early 2012, has continued to operate from Kenya with relative freedom, sending funds and recruits to Somalia in support of Al Shabaab, while developing plans to conduct terrorist attacks inside Kenya and deploying several operational cells for this purpose.

“MYC relies heavily on the ideological guidance of prominent Kenyan Islamist extremists including Sheikh Aboud Rogo, a radical cleric based in Mombasa, Kenya, known associate of members of Al-Qaeda East Africa and advocate of the violent overthrow of the Kenyan government. In consultation with Rogo, MYC has not only changed its name, but reorganized its membership and finances in order to permit its organization, the Pumwani Riyadha Mosque Committee (PRMC) in Nairobi, to continue funding Al Shabaab,” the Monitoring Group said.

Meanwhile, the Tanzania-based Ansar Muslim Youth Centre (AMYC) raises funds and recruits on behalf of Al Shabaab. Headed by Sheikh Salim Abdulrahim Barahiyan, the AMYC is based in Tanga and draws upon an extensive network of mosques across Tanzania, according to the report.

“Like the MYC in Kenya, the AMYC leadership is closely associated with the Kenyan extremist, Aboud Rogo, and many of its senior members were previously associated with the Al-Qaida-linked Tanzania office of the Al-Haramayn Foundation. However, AMYC collaborates closely with Tanga-based criminal networks, including a notorious drug smuggling ring, for the movement of Al Shabaab recruits and trainers to and from Somalia.”

Government troops and African Union peacekeepers say they have tightened security before a presidential election on August 20 when the transitional government will be dissolved. A combined force including Kenyan, Burundian, Ethiopian and Djiboutian troops is planning an offensive on Kismayu, Somalia's second biggest city and a hub for al Shabaab, before then.

Al Shabaab has threatened more attacks as Somalia's three top government officials and a dozen other politicians campaign for the presidency.

The Monitoring Group cautions that the transfer of power to a more effective, legitimate and broad-based national authority is threatened by the efforts of diverse Somali political leaders and their supporters to hijack or derail the transitional process – outcomes that would fuel continued instability and conflict, potentially reviving the fortunes of an embattled Al Shabaab. by defenceWeb
Posted by Unknown at 9:16 PM