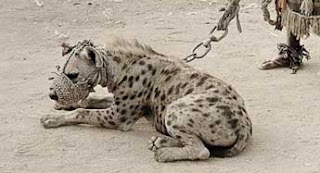 Thursday, August 23, 2012 (tf.sf) Al-Shabaab has begun pushing the sale of hyena meat in the southern Somali port city of Kismayo as a means to raise money for its military operations ahead of the impending battle against Somali and allied forces, analysts say. Somali clerics for centuries have considered the consumption of hyena meat prohibited by Islam since the animal eats the dead flesh of humans and animals.
This new push is one of many signs that point to the growing financial desperation of the al-Qaeda-allied group as Somali and allied forces continue to takeover al-Shabaab strongholds throughout the country.

To convince residents to eat the meat, which is also often diseased because the animal is a scavenger, al-Shabaab merchants have been using old black magic myths to prey on those who do not know better, said Suleiman Abdi Guled, a cook at Hotel Alkhalej in Mogadishu who has family in Kismayo.According to people who practice black magic, hyena meat is good for breaking spells and protects against illness and the evil eye."It is a worrying sign because it is outside of [Somali] tradition to eat hyenas, especially when there are other animals available for consumption," he said. "Al-Shabaab is a lost group that is trying to use hyenas and black magic myths for its military operations."Khalif Mohamud, a merchant in Kismayo, said al-Shabaab makes money from the trade by controlling the slaughtering of hyenas.
"Al-Shabaab runs the city's main slaughterhouse and we have to pay money to slaughter and skin the animal after hunting it," he told Sabahi.
Hyena meat -- religiously sanctioned or prohibited?

Somali cleric Sheikh Mohamud Awabdulle Ariif said people are prohibited from hunting and eating hyenas under sharia law."Hyenas are among the most treacherous and gluttonous of animals, as they hunt sheep and eat human flesh," he said. "They also dig up graves and take out and eat the corpses, in addition to eating animal carcasses, insects and the remains of other prey."Mursal Issac, a civil society activist in Mogadishu, said al-Shabaab's weakened financial state has led the group to resort to trading in charcoal and hyena meat to finance its military operations."Hyenas are dirty animals that eat dead carcasses, which is why I call on our brethren in Kismayo to refrain from eating its meat," he told Sabahi. "We are blessed by God with land and sea animals, and I think it is better to stay away from this animal."Issac said al-Shabaab is attempting to bolster its fragile state of funding because it fears military defeat at the hands of the Somali army and the African Union Mission in Somalia (AMISOM).Sagal Hassan Ali, who works in a small restaurant in the Via Afmadow suburb of Kismayo, said she would not eat hyena meat and would not even dare hunt this vicious animal.She told Sabahi she resents the local market turning into a trading ground for this meat.

Al-Shabaab splintering
Sociologist Mana Moalim Ino said selling hyena meat in Kismayo's markets serves the interests of militants who have taken up arms against Somali government and AMISOM forces.Nonetheless, she told Sabahi that the failure, despair and defeat that al-Shabaab's leadership suffers from will spell victory for the allied forces.Ino said the Somali army, backed by AMISOM, will expel al-Qaeda and its Somali followers from its hideouts in Kismayo, Marka, Boali, Baardheere and Jowhar."So far, our armed forces have been vindicated in their fight against al-Qaeda," she said. "These victories have given us hope that the Somali army is still doing well, is not divided along tribal lines and is not hopelessly incapable."Over the past six months, al-Shabaab has lost its most important strongholds and positions in Mogadishu, as well as the towns of Afgoye, Balad and Afmadow. Allied forces have also dealt serious blows to al-Shabaab in the Gedo, Lower Juba and Middle Juba regions.Due to recent losses, al-Shabaab has been engaging in new tactics, launching propaganda campaigns and terrorist attacks in Kenya, and assassinating journalists in Mogadishu.