One Year Anniversary of Al-Shabaab Fleeing Mogadishu, transforms one year on from al-Shabaab exit

The soundtrack to a day in Mogadishu, Somalia's scarred capital, is very different today than it was a year ago, Mike Pflanz and Abdiaziz Abdinor report. 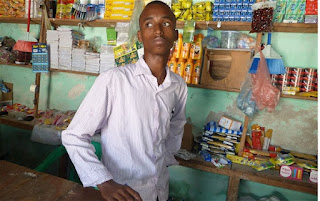 Then, shells and small-arms fire echoed across the seaside city's empty streets as al-Qaeda-linked Islamist fighters withered under the onslaught of an African Union army.
Today, a year since al-Shabaab, that extremist militia, deserted its foxholes and sniper points and left the city to government forces, the sounds of a Mogadishu morning are the cracks of hammers and the drones of drills.
Somalia's capital is in the midst of its greatest transformation in 20 years, bringing cautious hope that a measure of peace may finally be taking root.
The shift started with al-Shabaab's departure from central Mogadishu, overnight on August 6 last year, after months of daily bombardment by the African Union mission, AMISOM.
Now scaffolding covers new buildings. Traders no longer fearing stray bullets fit glass to their shopfronts, and street lights brighten evenings along repaired roads that were front lines just a year ago. Down at Lido Beach, teams play volleyball beside the surf.
Posted by Unknown at 9:00 PM