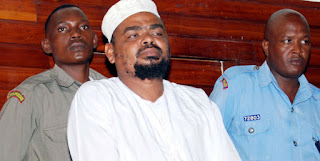 Rogo Mohammed before the Mombasa Chief Magistrate where he was charged for being in possession of illegal firearms in this file photo. Mr Mohammed is among three Kenyans whose assets have been frozen by the US over alleged links to Al Shabaab. Nation Media Group
update on Cleric ‘was plotting attacks’ in Mombasa


Al-Shabaab suspect Aboud Rogo was on Monday killed in a drive-by shooting in Bamburi area, Mombasa, while taking his sick wife to hospital.The deceased was facing charges of illegal possession of weapons. In the case, police said Mr Rogo was plotting attacks at a Catholic church, the Likoni Ferry and Nyali Bridge.Mr Rogo was shot near the Pirates beach while driving a van that had six other passengers.According to his wife, Haniya Said Saval, their van had been trailed by another car for a while. The car overtook them and in the process 18 bullets sprayed on Mr Rogo.Mr Rogo's van swerved off the road where died on the spot. His father in-law was also hurt in the hand.