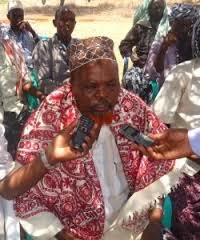 
Raaskambooni Gunmen have shot dead a prominent Somali elder in the port city of Kismayu on Monday. Elder from  Armale clan ,an influential clan elder was shot and killed by two  Raaskambooni soldiers;  near a mosque after Asr prayer. Human rights advocates condemn the murder of Hussein Hafow Ahmed. he was  murdered at point blank range. According to witnesses, The two raskaanbooni soldiers shot him,  then fled the scene after the heinous incident.

no  suspects were arrested by the police.This latest killing comes after targeted assassinations against some Somali  clans  . Raskaanbooni with onlf militant group carried out several attacks last three months in kismayu . There have been  rapid rise in the number of civilians killed in the city .The dead is said to be a critic of the new Juba Land administration and very vocal very  advocates .More than 240 people have been killed for the last 6 months.
Business activities in Kismayo came to stand still after series of targeted killings against local traders and elders.


Hussein Hafow Ahmed was one of Jubba elders spox criticizes IJA head Madobe for failing to hand over port/airport per Addis deal
Posted by Unknown at 8:41 AM