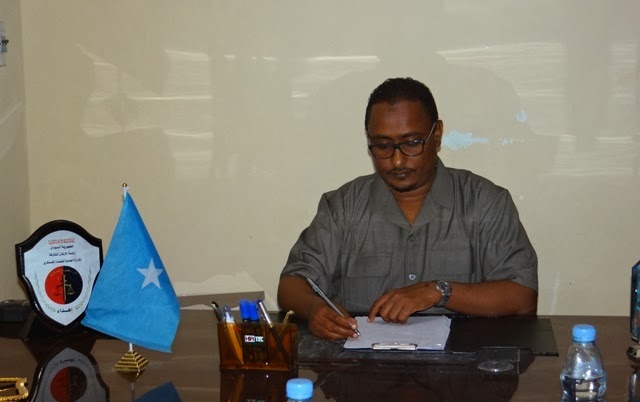 The new Mogadishu Mayor, Gen Hassan Hussein Mungab.
Mogadishu (terrorfreesomalia) The new Mogadishu Mayor Gen Hassan Mohamed Hussein “Mungab” has been rewarded with a total authority to deal with insecurity in the capital, Mogadishu, Terror Free Somalia reports.
Mr Mungab, 42, the former military court chief, has been appointed as the new Mogadishu Mayor and Governor of Benadir region by a presidential decree which also sacked the former mayor Mohamud Ahmed Tarsan who has served for more than three years.
According to security experts, what many Somalis were looking was not his appointment but the total authority that Mr Mungab has been offered by President Hassan Sheikh Mohamud.
“By now the regional office of the national security agency and the Mogadishu police command will serve under the command of the new mayor.” The President’s decree said on Thursday.
The appointment came as Mogadishu, the country’s biggest and largest populated has been hit with two suicide car attacks that lost the lives of dozens of citizens. One of the two attacks hit inside the president’s office making the security of Mogadishu as real threat.
“By looking how the nomination of the former military court judge as governor and Mogadishu mayor, it demonstrates how far the security is an issue of concern.” Mohamud Abdulle, a security expert in Mogadishu says.  “But the total power that he new mayor has is to be questioned.” he added.
Two weeks ago, the sacked Mayor, Mr Tarsan made his concern public following lack of cooperation between the security officials and the mayor’s office, a call which none was willing to listen, so that is why the citizens in Mogadishu were attempting to know more on the motive behind the extra power that the new mayor has.
Posted by Unknown at 12:11 PM