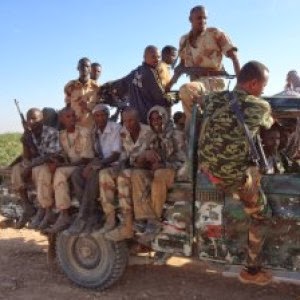 Somali national army in line with African Union troops today seized the control of Moqokori village,Hiran region from the Al-qaida affiliated militants Al-shabab.
The joint forces captured the village after not facing resistance from Al-shabab militants.Al-shabab militants had been losing the control of key towns in south and central Somalia to Somali forces backed by African Union troops.
Calm is reported to have returned in the village after the joint forces captured following Al-shabab’s withdrawal from Moqokori.
There are no casualties reported from this capture; the joint forces peacefully captured the control of Maqokori added Somali national army commander.
Posted by Unknown at 1:31 PM