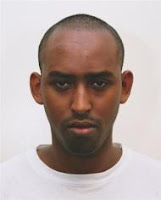 LONDON (AFP) - A woman was jailed for three years Friday for helping her fiance flee in a burka after he tried to blow himself up during a wave of failed suicide bombings in London in 2005. Fardosa Abdullahi, 20, gave Yassin Omar -- jailed for at least 40 years last year after his conviction for conspiracy to murder -- her mother's burka to help him get out of London the day after the failed attacks on July 21, 2005. Omar is thought to have been one of the ringleaders of a plot to blow up three London underground trains and a bus, which came two weeks after suicide bombers killed 52 people on the city's public transport system.
The six foot two inches (1.88 metre) tall extremist also shaved his arms and carried a white handbag for his bus journey from London to Birmingham, central England, the day after the failed attack.
He was arrested in Birmingham five days later by armed police.
At the Central Criminal Court, or Old Bailey, in London, Judge Paul Worsley rejected an argument that Abdullahi, of north London, should be spared jail because she is pregnant and had a long history of mental illness.
"The message must go out that this court will not go soft on those who assist terrorists -- even those who are young, vulnerable and under pressure, as you undoubtedly are," the judge said.
He added that, as a Somali who had been given leave to remain by British immigration, Abdullahi had a "responsibility to this country (which) should have been greater than your responsibility to your husband or fiance".
She and Omar got engaged just four days before the failed attacks, the court heard.
Abullahi had pleaded guilty to a charge of assisting an offender last month.
As well as helping Omar to dress as a Muslim woman, the charge against her said she had provided him with a telephone and given police false information.
Her sentencing brings to an end a series of cases in which 16 people have been convicted of offences linked to the failed suicide bombings.
Posted by Unknown at 9:37 AM