They Have No Authority to Remove Me from Chairmanship 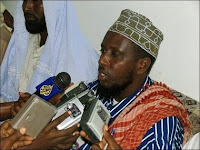 Chairman of the ICU Sheik Sharif Sheik Ahmed has opposed a decision to remove him from the chairmanship of theICU . Members of the ICU (AL SHABAAB) Terrorist in Asmara announced yesterday that they have removed him from the position of Chairman which has been holding since the founding the ICU.Sheik Sharif said that the ICU members in Asmara do not have the quorum to remove him from the position and in any case he has don nothing wrong to warrant such a decision.“It takes 2/3 of the membership to remove me from the chairmanship of the organization, and as we know the members in Asmara do not number 2/3 of the membership of ICU” said Sheik Sharif who added that there is no reason for them to remove him from Chairmanship.“They can remove me from the position on two grounds which are incompetence or making mistakes and neither has occurred. The only thing I am being accused of is working for peace” Sheik Sherrif told Shabelle radio of Mogadishu from Djibouti.“If there is a mistake it is being made by the members in Asmara who, contrary to what Islam mandates, have opposed” said Sheik Sharrif who added that the ARS members in Asmara are not free to express their views for fear of reprisal from Eritrean government which he said does not want to see a peaceful Somalia and the withdrawal of Ethiopian troops from Somalia. “Eritrea sees the withdrawal of Ethiopian troops from Somali counterproductive to its interests therefore it would not allow the resolution of the problems in Somalia” said Sheik Sharrif. Sheik Sharif continues his speech by saying that they are (his group) determined to make sure that Ethiopian troops leave Somalia. “We are all struggling to ensure the withdrawal of Ethiopian troops from Somalia therefore what is wrong with striving to that end without the use of the gun” added Sheik Sharrif. All in all, the ICU Terrorist, which was founded by groups from ICU USC. SNA\s, seem to have officially broken into two sides with opposing leadership
Posted by Unknown at 4:13 PM