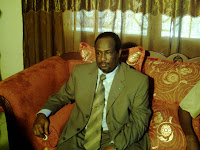 BAIDOA, Somali law makers in the country's southwestern town of Baidoa, where the parliament sits, have called on Prime Minister Nur "Adde" Hassan Hussein to resign during a meeting on Thursday.A document, signed by 32 Members of Parliament, was handed over to parliament leaders today.MP Nasro Abdisalam, who read the document to journalists in Baidoa, accused Prime Minister Nur Adde's government of "constitutional violations," "misuse of government funds" and "interfering with the Central Bank's affairs."The 32 MPs reached the decision after reading a memo from the Somali parliament' s finance subcommittee, which detailed government revenue and expenditure since the Prime Minister's appointment in November.
The lawmakers' document called on interim President Abdullahi Yusuf to accept the Prime Minister's resignation, should Nur Adde decide to resign.Government sources in Baidoa tell that "many" of the MPs calling for Prime Minister Nur Adde's resignation are seen as allies of President Yusuf.

move by Somalia's Prime Minister Nur Hassan Hussein to replace some cabinet ministers who reportedly resigned in protest after the controversial yet powerful mayor of Mogadishu was sacked is generating intense debate. Hussein reportedly said the resignations would not affect government's work, adding that the transitional government was working well despite the resignations, which he claims were designed to create instability in the country and to undermine a recently signed Djibouti peace process between the government and an Eritrea-based opposition more.. http://voanews.com/english/Africa/2008-08-05-voa3.cfm
Posted by Siad barre at 10:03 AM