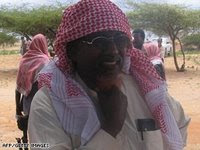 Asmara Eritrea ICU AL-SHABAAB of Somalia has announced that their chairman Sheikh Sharif Sheikh Ahmed has been stripped from his headship position and was nominated new chairman by supreme leadership of the group officials said.Correspondents say the move paved the way for Al Shabab leader Terrorist Hassan DahirAweys to appoint as chairman.The (ICU)Al Shabab .ICU Sharif Sheikh Ahmed wing signed a peace deal with the transitional government on 9th June 2008, ending a decade of civil war in which thousands of people were killed. This

indicates that the(ICU) ARS has broken away into two factions.The deputy chairman of the group was appointed as Sharif Salah.Somalia's interim government and some members of the (ICU)ARS signed a deal in Djibouti last month calling for the deployment of U.N. peacekeepers and agreeing to a ceasefire after a month. but Terrorist Hassan Dahir aweys rejected that agreement
We shall keep you posted news on this matter