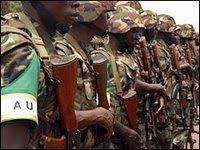 Up to 400 African Union (AU) peacekeepers arrived on Saturday in Mogadishu, Somalia's capital according to sources close to AMISOM troops."A two cargo planes carrying the contingent of Burundian troops have landed and they are expected to join their colleagues at Former nation university," AU officer told media Saturday by phone.The officer, who was at Mogadishu International Airport to meet the troops, said a ceremony would be held to welcome the Burundians. AMISOM s spokesman Brigye Bohoku he rejected to give further details on the arrival of the troops.The AU mission, AMISOM, is guarding sites in the chaotic Somali capital where a U.N.-backed interim government and its Ethiopian military allies are fighting Islamist insurgents.The multinational African force was supposed to be 8,000 strong but has been operating for months with 2,200 soldiers, all from Uganda and Burundi.
More Burundi troops deploy in Mogadishu http://www.alertnet.org/thenews/newsdesk/LB557585.htm
Posted by Siad barre at 9:20 AM