A Ukrainian arms ship hijacked off the Somali coast is running out of fuel, three weeks after it was seized while heading to the port of Mombasa according sources.A maritime official said that the MV Faina highly depends of fuel for ventilation, lighting and cooking. The (Somali) pirates have been demanding a 1.4bn (Kenya) shilling ransom to release the MV Faina and its 21 crew. The crew of the ship have expressed concern over threats on the sinking of the ships added to woes of Blowing up threat seeing that they were givern for further house of blowing up to pay ransom.
Seafarers Kenya Chapter association coordinator Andrew Mwangura says the US vessel and navy ships from other countries that are currently shadowing the ship can help refuel the stricken freighter currently anchored off the Somali fishing village of Hobiyo. As warships from the United States and other navies kept close watch on the MV Faina off Somalia's Indian Ocean coast, the pirates insisted on being paid before releasing the cargo and the 21-member crew.The freighter contains 33 T-72M1 and T72-M1K battle tanks, six anti-aircraft defence systems, 150 RPG-7 grenade-launchers, six missile-launchers and 14,000 rounds of 125 mm ammunition.
There are about 50 armed pirates aboard the ship mingling with the crew.At least 69 ships have been attacked by pirates off the coast of Somalia since the start of this year.
Pirates seize another ship with 21 crew near Somalia
KUALA LUMPUR, MALAYSIA (AP) - A maritime official says armed pirates have hijacked a bulk carrier with 21 crew members in the Gulf of Aden near Somalia. Noel Choong of the International Maritime Bureau says the ship was sailing from the Middle East to Asia when it was seized Wednesday. The ship flies a Panamanian flag but is operated in the Philippines. No further details were immediately available. Wednesday's hijacking pushed the number of attacks this year in the African waters to 73. A total of 29 ships have been hijacked. Choong says 11 remain in the hands of pirates along with more than 200 crew members
http://www.ddinews.gov.in/International/International+-+Headlines/dfdsf.htm 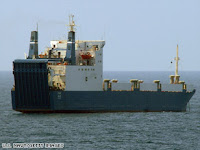