US Seeks Cooperation with China in Africa 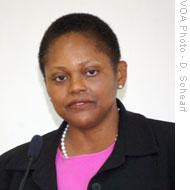 A U.S. official says Washington wants to cooperate with China to help Africa develop. China has been criticized for its dealings with abusive African governments, but has also won applause for encouraging dialogue between Sudan and the international community. Daniel Schearf reports from Beijing. more..http://www.voanews.com/english/2008-10-15-voa13.cfm
Posted by Siad barre at 3:52 PM