All at sea in Somalia

THE seizure of at least 30 vessels so far this year and the high ransoms demanded and paid for the release of ships' crews underscore how piracy has become big business in Somalia. With some 130 crew members from at least seven vessels, including two tankers from Malaysia, being held hostage in the village of Eyl, piracy has reached new heights in the Gulf of Aden. The busy maritime waterway to the Suez Canal has become more dangerous than ever before not only to merchant shipping but also to vessels carrying international aid to Somalia.
While the establishment of a Maritime Security Patrol Area is a positive step, it remains to be seen whether enough nations will dedicate sufficient naval and air forces to fully patrol and monitor coastal waters the size of Somalia's and bring about a significant reduction in pirate attacks. In any event, it will be difficult to assure safe passage. Moreover, whatever action is taken on the seas will prove to be inadequate because the root of the problem of piracy on the high seas stems from dry land. It was rare before the fall of the Barre regime in 1991 and during the short rule of the Union of Islamic Courts in 2006, because there was a measure of law and order. But Somalia has become a haven for pirates because the present government can't even control the capital, let alone the country. There's infighting between the president and the prime minister, and rebel forces have made a comeback after being ousted by government troops backed by Ethiopian soldiers. The Djibouti Agreement has done little to restore order and quell the violence, which has displaced thousands of people. Without political stability and a strong central authority in Somalia, it will be difficult to tackle piracy.Now that the killings and bombings have been compounded by inflation and drought and triggered a humanitarian crisis that aid agencies fear may be the worst in Africa, and pirates have made its waters the most perilous in the world, there should be no forgetting Somalia. But at the moment, there's little hope that it will get the attention it needs. Given other priorities and commitments, it is unlikely that the West will commit significant resources to resolve the crisis in Somalia. Despite their best efforts, the peacekeepers from the African Union will not be able to bring stability. The best that Malaysians can hope for is that the negotiators will be able to free the Malaysian hostages as quickly and safely as possible. 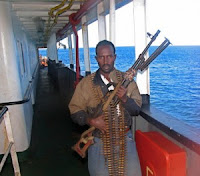 Somalia Opens its Waters to Nations Wanting to Fight Piracy

A major blow to piracy along the African coast was struck Wednesday when the government of Somalia announced that it was authorizing foreign powers to enter its territorial waters to use force against pirates. A similar edict was handed down in June by the U.N. Security Council when it passed a resolution establishing the rights of nations to send warships into Somalia it prevent piracy, as long as those nations do so with the cooperation of the Somali government. The declaration comes in response to a recent act of piracy where a Ukrainian ship transporting 33 Soviet-made T-72 tanks, along with light and heavy weapons was taken hostage by pirates to be held for 20 million dollars in ransom. The US Navy routinely patrols the waters off of the African coast to reduce piracy, and Russia has sent a warship to offer protection to the few Russian hostages on board the ship, but neither has made any indication that it will be entering Somali waters to attack the pirates. Several European Union nations also offered Wednesday to join together in creating a patrolling force to help police the increasingly dangerous area. Among those offering to work together are Belgium, Cyprus, France, Germany, Lithuania, the Netherlands, Spain and Sweden. According to the EU charter, however, they cannot take action until a formal EU meeting is held.

Somali pirates free Japanese tanker for ransom
BOSASSO, Somalia (Reuters) - Somali pirates freed a Japanese chemical tanker and its crew on Thursday after a $1.6 million ransom was paid, a regional government official said.
The MT Irene was seized by gunmen on August 21 as it traveled to India from France through the Gulf of Aden. more.http://www.reuters.com/article/worldNews/idUSTRE4981KO20081009?feedType=RSS&feedName=worldNews

The confrontation between foreign warships and well-armed pirates off the coast of lawless Somalia is a dramatic reminder to Asia of the importance of safeguarding busy channels used by international shipping, particularly the Straits of Malacca and Singapore. This is the shortest sea route between the energy-rich Persian Gulf and voracious energy consumers in Northeast Asia, especially China, Japan and South Korea....more..http://www.scmp.com/portal/site/SCMP/menuitem.2c913216495213d5df646910cba0a0a0/?vgnextoid=3330b93d7bcdc110VgnVCM100000360a0a0aRCRD&vgnextfmt=teaser&ss=Insight&s=Opinion
Posted by Unknown at 9:55 AM