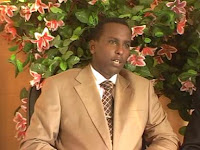 Marka-somaliaThe acting regional commissioner of Lower Shabelle Region (southern Somalia), Muhammad Mahmud Ilmi, has died following injuries he sustained in yesterday's landmine explosion in the provincial town, Marka. Abdifatah Ibrahim Shaweye (a former member of Mogadishu regional administration) confirmed the death of Mr Ilmi. He said the acting regional governor died at the AMISOM (African Union Mission to Somalia) hospital in Mogadishu, where he was admitted following yesterday's attack.Mr Muhammad Mahmud Ilmi, was seriously wounded in a landmine attack that took place in Marka, the provincial town of Lower Shabelle Region. In the attack the deputy regional police commissioner of Lower Shabelle, Nuriye Ali Farah, was killed on the spot.
Posted by Unknown at 4:06 PM