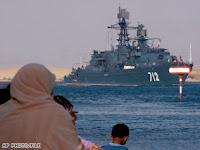 CNN) -- Five attempts to hijack ships off the coast of Somalia were thwarted Tuesday by the ships' crews, the U.S.-led coalition that monitors the region said Wednesday. A Russian frigate traverses the Suez Canal this month on its way to help control piracy off Somalia.
"Even when shots were fired during two of these attacks, the crews of commercial shipping vessels conducted evasive maneuvering and used fire hoses to repel their attackers," the Combined Maritime Forces said in a news release. Even in a region plagued by piracy, five hijacking attempts in one day may be a record. More than 60 ships have been attacked by Somali pirates in the Gulf of Aden this year, compared with about half that many in all of 2007, according to a report released this month by Chatham House, an institute in London, England, that analyzes international affairs. The report found the $18 million to $30 million in ransom already paid this year for pirated ships is helping to finance the civil war in Somalia.
Al-Shabaab, an Islamic militant group that is waging a bloody battle for control of Somalia, is reported to be among groups receiving ransom money from pirates

U.S. Navy ships repel pirates off East Africa
MANAMA, Bahrain: The U.S. Navy says commercial shipping vessels have thwarted five attempted hijackings by pirates in the busy shipping channel off the Horn of Africa.
The five incidents happened Tuesday in the Gulf of Aden off Africa's east coast. That is where Somali pirates have been besieging merchant ships, freighters and fishing trawlers in search of million-dollar ransoms.
In two of the attempts, pirates fired shots. But the ship crews were able to repel the assailants through evasive maneuvering and by blasting the pirates' boasts with fire hoses.
The U.S.-led naval coalition that helps patrol the area announced the attempted hijackings Wednesday in a statement released at its headquarters in Bahrain ..more..http://www.iht.com/articles/ap/2008/10/29/news/ML-US-Navy-Piracy.php

President Kibaki has called for the development of a regional maritime security policy framework in collaboration with the international community.http://www.nation.co.ke/News/-/1056/485132/-/tlicrm/-/index.html

BOOSAASO, Somalia — This may be one of the most dangerous towns in Somalia, a place where you can get kidnapped faster than you can wipe the sweat off your brow. But it is also one of the most prosperous. more..http://www.nytimes.com/2008/10/31/world/africa/31pirates.html?_r=2&hp&oref=slogin&oref=slogin
Posted by Unknown at 10:42 AM