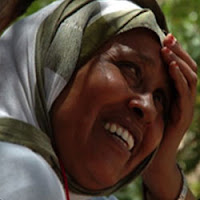 The 2008 winners of the National Geographic Society/Buffett Award for Leadership in Conservation are Denise Marçal Rambaldi, executive director of the Golden Lion Tamarin Association, and Fatima Jama Jibrell, founder of the humanitarian organization Horn Relief and co-founder of Sun Fire Cooking, which provides affordable solar cookers to the Somali people.
Rambaldi (lower photo) is being recognized for her leadership in conservation on the continent of South America. Jibrell wins for leadership in African conservation. more..http://blogs.nationalgeographic.com/blogs/news/chiefeditor/2008/12/conservation-heroes.html

Ethiopian troops and mostly hawiye jehadist al- shabaab groups who are facing each other in parts of Hiiraan Region [central Somalia hawaye town ] have affected traffic in the region.
The road linking Bay Region [southwestern Somalia] and Banadir remains closed following fighting that took place yesterday between Ethiopian troops who were in the area and Al-Shabab jehadist, which attacked them on the way. The fighting broke out in the town of Kaba Hirig in Lower Shabelle Region [southern Somalia].Many vehicles headed for Bay Region are this morning stranded in the town of Wanle Weyne in Lower Shabeelle. Areas where the fighting took place yesterday are reported to be calm as Ethiopian troops established a base in the town of Kaba Hirig in Lower Shabelle where the fighting took place yesterday.mostly hawiye Residents of central Somalia Region a Terrorist rebel stronghold have welcomed the advancement of Al-Shabab jehadist and its capture of various parts of central Somalia.The USC,http://en.wikipedia.org/wiki/Mohamed_Farrah_Aidid a Hawiye organization founded in 1989, had suffered from factionalism based on subclan rivalries since its creation. General Mahammad Faarah Aidid commanded the Habar Gidir clan, and Ali Mahdi Mahammad headed the Abgaal clan... The Hawiye occupy the south central portions of Somalia. The capital of Mogadishu is located in the country of the Abgaal, a Hawiye subclan. In numbers the Hawiye in Somalia are roughly comparable to the Isaaq, occupying a distant second place to the Daarood clans. since warlords overthrew Siad Bare.Somalia has been at war since 1991, The Horn of Africa nation has been plagued by chaos and clan-based civil war since when hawiye Warlordism, terrorism. PIRATESM ,(TRIBILISM) Replaces the Honourable Somali President Mohamed Siad Barre administration .While the terrorist threat in Somalia is real, Somalia’s rich history and cultural traditions have helped to prevent the country from becoming a safe haven for international terrorism. The long-term terrorist threat in Somalia, however, can only be addressed through the establishment of a functioning central government Videos: Jihad Camp in Somalia; English-Speaking Recruits WWW.KATAAIB.NET IN VANCOUVER WA, PRIVATE INVESTIGATOR BILL WARNER... Most of the Terrorist are from Hawiye tribe (al-shabaab) The leadership is mostly sub-clans of Hawiye (Habar Gidir clan) With The Exception Of OGADEN CLAN http://www.youtube.com/watch?v=dB2mnoXLoec&feature=related (ONLF )own hassan turki(http://en.wikipedia.org/wiki/Hasan_Hersi) and Abu Mansur a foot soldier from al-Qaeda.http://www.state.gov/r/pa/prs/ps/2008/mar/102338.htm

to gather troops for Somalia stabilization

UNITED NATIONS, Dec 12 (Reuters) - The United Nations has been unable to put together a multinational military force to stabilize Somalia, which diplomats said means the lawless Horn of Africa country might be left to fend for itself.
In a report to the U.N. Security Council last month, Secretary-General Ban Ki-moon made clear that the kind of force that would be needed for Somalia was beyond the capabilities of blue helmet peacekeepers, who are typically deployed to monitor an existing peace agreement and not to crush an insurgency.
Ban said the initial stabilization force would need around two brigades -- roughly 10,000 troops -- and would have to be a "highly capable, self-sustaining, expeditionary force with full capability to defend itself against hostile threats." more..http://africa.reuters.com/country/ET/news/usnN12458233.html
Uganda says AU peacekeepers to quit Somalia if Ethiopian forces go

Nairobi/Kampala - Uganda on Friday confirmed that the African Union peacekeeping force in Somalia will pull out should Ethiopia stick to its promise of withdrawing its troops before the end of the year. "If the Ethiopians pull out ... the AU force will pull out because it will not have adequate numbers," James Mugume, permanent secretary at the Ugandan Foreign Ministry, told Deutsche Presse-Agentur dpa.
The Ethiopian government in late November said it would extract its several thousand soldiers unconditionally by the end of the year.
Ethiopian Prime Minister Meles Zenawi on Thursday broke the news that the AU force would also leave and promised to help the Ugandan and Burundian peacekeepers, numbering around 3,000, to pull out. more..http://www.earthtimes.org/articles/show/245904,uganda-says-au-peacekeepers-to-quit-somalia-if-ethiopian-forces-go.html
Posted by Siad barre at 12:24 PM