Pirates off the Horn of Africa backed by global network with money, equipment

MOGADISHU, Somalia (AP) — Ahmed Dahir Suleyman is cagey as he talks about the global network that funds and supports piracy off the coast of Somalia."We have negotiators, translators and agents in many areas ... let me say across the world," said Suleyman, a pirate in the harbor town of Eyl, where scores of hijacked ships are docked.
"These people help us during exchanges of ransom and finding out the exact person to negotiate with," he told The Associated Press. Before cutting off the cell phone call, Suleyman snapped: "It is not possible to ask anymore about our secrets.".. more..http://www.latimes.com/news/nationworld/world/wire/sns-ap-af-somalia-global-piracy,1,5106411.story
Somali pirates free Greek ship, 19 crew 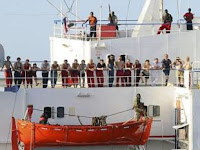 ne.wsj.com/article/SB122886821440893125.html
Germany approves EU mission to fight piracy
http://seattletimes.nwsource.com/html/businesstechnology/2008489622_apeupiracygermany.html?syndication=rss
Pirates free 17 Filipino sailors off Somalia
http://www.monstersandcritics.com/news/africa/news/article_1447499.php/Pirates_free_17_Filipino_sailors_off_Somalia_
US calls on UN to hunt pirates by land and air
UNITED NATIONS – The U.S. is proposing that the United Nations authorize tracking down Somali pirates not only at sea, but on land and in Somali air space with cooperation from the African country's weak U.N.-backed government.
The United States is circulating a draft U.N. Security Council resolution on the issue, as part of one of the Bush administration's last major foreign policy initiatives. The resolution proposes that all nations and regional groups cooperating with Somalia's government in the fight against piracy and armed robbery "may take all necessary measures ashore in Somalia."
Somalia's government is welcoming the U.S. initiative. Somali government spokesman Abdi Haji Gobdon said Thursday the government will offer any help it can. more..http://news.yahoo.com/s/ap/20081211/ap_on_re_af/un_un_somalia
Pirates cashed in $120m - UN
Nairobi - Somali pirates have raked in more than $120m in ransom money since the start of 2008, the United Nations' top envoy for Somalia said at an international conference here on Thursday. Ahmedou Ould Abdallah said pirates had attacked 32 ships since October alone and warned the 140 delegates gathered in Nairobi that "the threat of piracy cannot and should not be underestimated anymore". "They may have collected over $120m for this year, with total impunity," he said. "This unprecedented rise in piracy is threatening the very freedom and safety of maritime trade routes, affecting not only Somalia and the region, but also a large percentage of world trade," he said. Ould Abdallah also said it was key to identify and target the financiers of the pirates boarding the ships, most of whom are former coastguards and seasonal fishermen more..http://www.news24.com/News24/Africa/News/0,,2-11-1447_2440845,00.html
Somalia backs U.S. plan to hunt pirates
http://www.reuters.com/article/worldNews/idUSTRE4BA31P20081211?feedType=RSS&feedName=worldNews
Posted by Siad barre at 1:32 AM