president Abdullahi Yusuf Ahmed says the move was necessary in order to "save the country".
http://news.bbc.co.uk/2/hi/africa/7782214.stm

BAIDOA, Somalia, Dec 14 (Reuters) - Somalia's President Abulahi Yusuf on Sunday sacked his prime minister, saying he had failed to bring security to the chaotic country. "I have dismissed Prime Minister Nur Abdi and will appoint a new one within three days. His government failed to extend the federal system and security to the nation," Yusuf told members of parliament. http://www.alertnet.org/thenews/newsdesk/LE374076.htm
Somali president sacks government http://english.aljazeera.net/news/asia/2008/12/200812147953267517.html 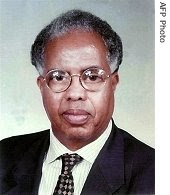