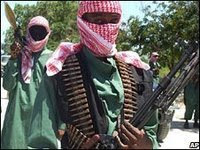 Somali Islamist group of Ahlusunna( Sufi )seized Guriel town in central Somalia after a brief battle with Alshabab Terrorist on Saturday, residents said.The Islamist Ahlu sunna seized the town that locates 300 km from Mogadishu. 15 person killed while more than 20 others were injured in the fighting that created more fears to the residents of the town."It is true that Islamists (Ahlusunna) captured Guriel, Alshabab fighters left from the town, resident man Elmi Hashi told by phone. Latest reports indicate that the fighters seized the town are patrolling the entire streets of the town.Witnesses said the fighters gave short speeches to people of the town after seizing it from a handful of Somali troops."We are not going to harm you and your people so keep calm," they told the people of Guriel... Guriel is Terrorist Hassan Dahir Aways MOST WANTED Hometown .The situation is reportedly calm as Ethiopian troops are heading to the town from near Balanbal town in Galgadud region. power struggle jehadist militia inside Habar Gidir Take Place Habargidir (cayr)hometown The most savage Hawiye occupy the south central portions of Somalia ...Original Story we translat ..http://www.bbc.co.uk/somali/news/story/2008/12/081227_shabaab_ahlusunna.shtml
Related Stories
Al Shabaab Guerrillas Seize Town in Galgadud Region After Battles
http://www.garoweonline.com/artman2/publish/Somalia_27/Somalia_Al_Shabaab_guerrillas_seize_town_in_Galgadud_region_after_battles.shtml

Radical Islamists linked to al-Qaeda set to take control of Somalia http://www.telegraph.co.uk/news/worldnews/africaandindianocean/somalia/3964681/Radical-Islamists-linked-to-al-Qaeda-set-to-take-control-of-Somalia.html
Posted by Unknown at 4:40 AM