delegation led by the Terror Sympathizers Hawiye Prime Minister of the Transitional Federal Government of Somalia [TFG], Nur Hassan Hussein alias Nor Adde and a delegation he was leading arrived in Baidoa , Bay Region [south western Somalia]. The President of the TFG, Abdullahi Yusuf Ahmad also went to Baidoa two days ago. Leaders of the TFG held a meeting at the residence of Speaker of the Somalia Parliament, Sheikh Adan Madobe, in Baidoa . The media was not allowed into the talks between the top leadership of the TFG. The meeting was to discuss the conflict between the top leadership of the TFG as the speaker of the Somali parliament, Sheikh Adan Madobe appears to be neutral in the conflict between Prime Minister Nur Adde and 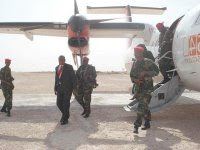 President Abdullahi Yusuf Ahmad. president yusuf seem to believe , TFG should never negotiate with terrorists and radicals .Although the meeting has ended, the top leadership of the TFG have not spoken to anyone about what went on in the meeting. They have since been holding separate meetings with Members of Parliament. MPs in Baidoa have said the town is calm as of now as the MPs are divided in expressing their support for the top government officials. It is not known how they can contribute in ending the conflict between the top leadership of the TFG. The top leadership of the TFG are in conflict about the appointment of new ministers whom the prime minister has appointed to replace some who had resigned. The Somali parliament is soon expected to commence its sessions as the conflict between the president and the prime minister is expected to be among the major items that will bedebated by the parliament.
Pirates, Terrorism and Failed States
http://online.wsj.com/article/SB122869822798786931.html
Posted by Siad barre at 3:34 AM