Ethiopia Should Invest in Somalia Now

Sheikh Sharif’s moderate position and inclusive strategies as Somali’s new president is to be commended, said Dr. Ayele Bekerie, an assistant professor in Cornell University’s African studies program. Ayele was interviewed by Adanech of the Amharic service on Friday.
Ayele said the new president’s conciliatory role at the Africa Union meeting is good news for the region and that he sounds willing to work with Ethiopia. Ethiopia should reciprocate by helping Somalia and by putting investments in the country. 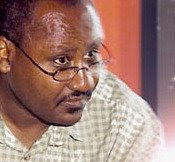 Ayele also talked about remarks made by the new AU chairmen, Mummer Qaddafi, regarding efforts to promote a pan-African policies.He cautioned such a movement should be approached with care. He also noted the irony of Qaddafi’s desire to be known as “king of kings” after his own successful efforts many years ago to overthrow a Libyan monarch.http://www.voanews.com/horn/2009-02-20-voa2.cfm
Dr. Ayele Bekerie:
Posted by Unknown at 6:48 AM