NAIROBI, Kenya: Italian nuns held captive in the Somali capital for more than two months "prayed all the time" but said they were well treated by kidnappers who identified themselves as being hardline Somali Islamic militants.
In a rare cross-border kidnapping, Maria Teresa Olivero, 60, and Caterina Giraudo, 67, were seized from the remote northeastern Kenya town of El Wak on Nov. 10. They then we 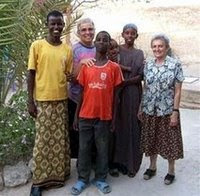 re driven to the Somali capital of Mogadishu, where they were kept under guard until Feb. 19.
On Thursday, they gave their first news conference since they were freed.
Olivero and Giraudo said they ate "good food." But since they had no contact with outside world, they spent a lot of time in prayer and read a Bible that the Islamic militiamen took from the pocket of a dead Ethiopian soldier.
"It was very hard. We didn't have news, we didn't know anything," Olivero said, adding the only thing to listen to was Somali radio stations...more.http://www.iht.com/articles/ap/2009/02/26/africa/AF-Kenya-Somalia-Freed-Nuns.php
Posted by Unknown at 11:10 PM