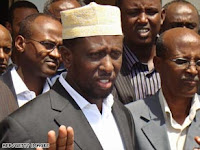 Somali President Sheikh Sharif Sheikh Ahmed said Saturday he will give in to a rebel demand that he impose Islamic law, or sharia, in an effort to halt fighting between Somali forces and Islamic insurgents,However, Ahmed told a news conference he won't agree to a strict interpretation of the law, which forbids girls from attending school, requires veils for women and beards for men, and bans music and television. The president, speaking at his palace in the capital, Mogadishu, said local elders and religious leaders, acting as liaisons with the militants, brought him a message saying the rebels wanted a truce in the two-year-old fighting. He also asked African peacekeepers to stand down. Ahmed, who was elected January 31, said he would ask the AU contingent to leave once there is a solid political solution to the conflict. More than 40,000 Somalis have returned to abandoned neighborhoods in Mogadishu over the past six weeks, despite some of the heaviest fighting in months, the U.N. High Commissioner for Refugees said Friday...more..http://www.cnn.com/2009/WORLD/africa/02/28/somalia.sharia/index.html?eref=rss_topstories
Posted by Siad barre at 11:26 PM