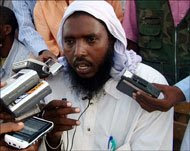 southern Somalia..Al Shabab, a hardline Islamist insurgent group controlling the coastal town of Kismayo.. terrorist Sheikh Hassan Yacquub ali the information secretary of the Islamic administration in Kismayo welcome terrorist Osama bin Laden Massagehttp://video.google.com/videoplay?docid=1750810473997886504&hl on press conference ..Since capturing Kismayo on August 23, the Al Shabab administration has imposed strict Sharia law ,,Al-Qaeda leader Osama bin Laden called on radical Islamists in Somalia ... "This Sheikh Sharif ... must be fought and toppled,he urged Somali militants to overthrow the country's new talaban president. welcomed the statement of Sheik Osama Bin Ladin, the leader of Al Qaeda network on Somalia, official said on Sunday,Sheik Yacquub said in the press conference that the statement of Sheik Osama Bin Ladin was a clear message to all the Mujahidin (Islamic fighters) in Somalia saying that Sheik Osama Bin Laden and more other Islamic leaders in the world helped the Somali people as the fighting was continuing in the country. Asked about Sheik Hassan Dahir Aways’ reaction on the statement of Sheik Osama Bin Laden, he replied that it was not good to oppose saying that they were in the same list. Asked about the relation between their administration and Sheik Osama Bin Laden, he said that the relation between them is the Islam and Jihaad (Islamic war) adding that they will continue their contact.The statement of Sheik Hassan Yacqub the spokesman of the Islamic administration in the port town of Kismayu comes as other statements against Osama’s message coming out from the Somali clerics. Hassan Terrorist Yacquub is a spokesman of the jehadist administration in Kismayu town in Lower Jubba region
Terrorist
hassan yaqup ali in the past.
Terrorist hassan Yaqub ali..Islamists warn Nairobi, Insurgents in southern Somalia accuse Kenyan troops of crossing into their territory
Posted by Unknown at 12:08 AM