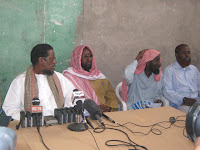 Terrorist Members from Hizbul Islam (Islamic Party) aka .. Somalia: Al Shabab's hawiye wing . Terrorist announced Monday in a meeting held in former pasta factory in north Mogadishu they have sacked their leader jehadist Sheik Omar Iman Abu Bakar and nominated jehadist Sheik Mohamed Hassan Amey as their leader.They have also nominated their spokesman as jehadist Sheik Da’ud Mohamed Abtidon. Mr. Abtidon, the new spokesman of Terrorist Hizbul Islam said “We fired the former leader because he broke the rules of the Party.” He also said that Hizbul Islam fought battles that their leader did not aware of and added that he rejected the calls by the Somali clerics who urged Islamists to stop the fighting. The Somali Uluma Association called for earlier all Islamist fighters to stop the fighting and demanded the African Union troops to be withdrawn from Somalia with in 120 days. jehadist Insurgent leader Sheik Yusuf Mohamed Siad better known as Indho Ade, a member of Terrorist Hizbul Islam.. aka shabaab hawiye.. said they support the decisions by the somali wahabi scholars.The group accused their former leader that he opposed the calls of the scholars..to see more pics...hawiye clan.. pr .. webside.story originated from .http://www.hiiraan.com/news/2009/Mar/wararka_maanta23-6064.htm ...Islamist group in Somalia sacks leader..they pass down to..information Daily to http://news.xinhuanet.com/english/2009-03/23/content_11059522.htm AlJazeera, Press TV bbc.voa .. and Others
hawiye-shabaab..Hisbul Islam Breaks into Two Factions..
worries about situation of 2 foreign journalists being held by (SAVAGE HAWIYE) habar-gidir
habar-gidir hawiye when are they going to Free Amanda Lindhout??What's the talaban hawiye President is going to do about it??
Posted by Siad barre at 5:18 PM