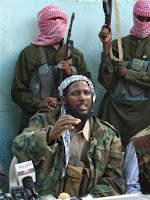 NAIROBI (AFP) – Egged on by Osama bin Laden and drawn in by Ethiopia's pullout, foreign jihadists have flocked to Somalia in recent months, joining forces with local fighters to turn the country into an Al-Qaeda haven. Somalia now shelters an estimated 450 foreign fighters who are working with the Shebab, a home-grown hardline Islamist group that has spearheaded a bloody insurgency since 2006. While foreign fighters wanted for links to Al-Qaeda have long used Somalia as a backyard, their numbers have swollen dramatically in 2009, experts say. "There were maybe 100 foreigners last year but now our estimate is up to 450," said Ismail Haji Noor, a former Somali security official who has established a secular militia bent on rooting out the Shebab and their foreign allies.
Noor said the foreign jihadists come from the United States, Europe, the Middle East and Asia and often enter the country on regular airlines from the northern semi-autonomous state of Somaliland. Most of them are concentrated in Garowe, in the northern breakaway state of Puntland, and the southern towns of Baidoa, Merka and Kismayo...more..http://news.yahoo.com/s/afp/20090327/wl_africa_afp/somaliaunrestattacksfocus_20090327104834
Posted by Siad barre at 8:56 AM