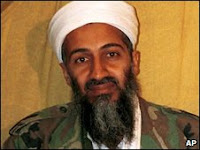 Osama Bin Laden has called for the overthrow of Somalia's moderate Islamist president in an audio recording published on the internet. Bin Laden said President Sharif Sheik Ahmed had "changed to partner up with the infidel". Mr Ahmed was inaugurated in January after UN-brokered reconciliation talks and has promised to introduce Sharia law to the strongly Muslim country. But al-Shabab insurgents allied to al-Qaeda have continued to fight him.
Correspondents say the voice on the recording could not be immediately verified but it resembles that of Bin Laden and was published on known militant websites.
'Enemies' pay' The 12-minute tape - entitled "Fight on, champions of Somalia" - carried an often-seen image of Bin Laden with a map of Somalia in the background. The Somali leader's election had been "induced by the American envoy in Kenya", the tape said, in a reference to Deputy US Secretary of State for African Affairs, Jendayi Frazer. This Sheikh Sharif... must be fought and toppled Bin Laden tapeaccused Mr Ahmed of having "changed and turned back on his heels... to partner up with the infidel" in a national unity government. "This Sheikh Sharif... must be fought and toppled," the tape said, before comparing the Somali leader to "the [Arab] presidents who are in the pay of our enemies".
It added: "How can intelligent people believe that yesterday's enemies on the basis of religion can become today's friends?" Mr Ahmed was a leader of the Union of Islamic Courts which controlled Mogadishu in 2006 before being ousted by Ethiopian forces, backing the previous Somali president. Somalia, a nation of about eight million people, has not had a functioning national government since warlords overthrew Siad Barre in 1991 and then turned on each other. As part of a UN-brokered deal to reconcile moderate Islamists and dissident lawmakers in a unity government, Ethiopian troops withdrew in January. ..more..http://news.bbc.co.uk/2/hi/africa/7952310.stm
Posted by Siad barre at 10:38 AM