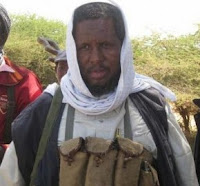 Wednesday, the Islamist group called Hisbu Islam Terrorist ..aka hawiye shabaab wing.. Terrorist announced that they cancelled the membership of one of the groups founders jehadist Yusuf Indha’ade.
The statement comes as a split emerges in the group, Yusuf Indha’ade a former warlord, said that the group will halt all fighting against the Somali government.

Earlier in the week a group led by Yusuf indha’ade himself declared that they were taking over the Hisbul Islam’s leadership, as they named a new Chairman for the Islamist rebel group.
Sources close to Indha’ade says his in a secret negosiations with the government, adding that he might get a cabinet position.
Posted by Unknown at 11:46 PM