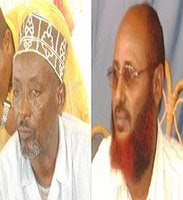 MOGADISHU.. Somalia: Hawiye Council Terror Sympathizer traditional clan elders opposed Wednesday the deployment of new African troops in the Somali capital Mogadishu. Uganda said Tuesday it deployed another battalion of soldiers in Somalia bringing the total number of its soldiers there to over 2,000. Abdulahi Hassan Abukar (Dhere) the political spokesman of Hawiye Council said the deployment of the troops will be an obstacle to the Somali peace ??????reconciliation efforts.
The new deployment comes two weeks after the Somali President Sheikh Sharif Sheik Ahmed visited Uganda and Burundi. Somali foreign minister Mohamed Abdulahi Omaar demanded from Uganda and Burundi to send three battalions to the country, but his request drew uproar from different parts of the Somali society. Islamist leaders accused the government of bringing more foreign troops in the country ????and vowed fresh fighting against the African troops.
The African Union peacekeepers now deployed in Somalia are 4,000 half of the 8,000 African Union peacekeepers required to help pacify the lawless country as an AU spokesman said on Tuesday.those holding Amanda Lindhout are hawiye British Aid workers Dick and Enid Eyeington in 2003. kill by hawiye .those who kill ..18 US soldiers and injured around 90 Mogadishu, On October 3,1993.. are hawiye ..On June 5, 1993, twenty-four Pakistani troops in the UN force were killed by hawiye ..Kate Peyton, 39, of Beyton, Suffolk, was shot in Mogadishu in February 2005 by hawiye . Hawiye clan attack Ethiopian and Somali security forces.. by hawiye ,also In another part of the city, seven Nigerian and three Pakistani UN soldiers were killed by hawiye ..11 peacekeepers killed in Somalia was kill by hawiye.. shabaab wing.. Enough Is Enough..The problem of Somalia is not a Somali Peoble ..The problem is the Hawiye clan....Hundreds of thousands of Somalis fled somalia ..Thousands displaced .Violence that has raged since 1991 has killed thousands of Somalis and forced hundreds.of ... as did many members of Mogadishu's dominant Hawiye clan..Southern of Somalia, the Hawiye militias deliberately kill unarmed civilians in Mogadishu and all central and southern region.. Here We Go Again .hawiye clan.. har-gidir ..pr .. from ..webside,..http://allafrica.com/stories/200903250268.html hawiye talking point ..know what's going to happen next! ..they talk ..Before They Attack
Clan elders are the pillars of Somali society,most of Somali traditional clan elders don't get involved, government business..and politics.. the only play their role ..their role Domestic/Family ..and This traditional mechanism served to settle disputes before they deteriorated. into clan blood feuds that might last traditional .Conflict ,Mediators.Somali clan elders are responsible making of Somaliland’ and puntland region after.somali Central government was overthrown by hawiye. . ...on the other hand ...hawiye olders have been transformed into a political clan party.. government interface..a Criminal organization ..Against peace to somalia ..the backers ..(usc\usc.sna\icu\shabaab\Terrorist Islamist groups and Criminal organization
Somalia ,,,.Who's Calling the Shots?:
Somalia: ‘New African peacekeepers secretly enter’: Indho Ade