Relatives of missing Somali men use homeland ties in search 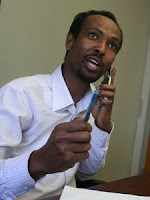 Families of some of the young Somali-American men who are thought to be fighting with Islamic extremists in the Horn of Africa are trying their own methods to bring them safely home. They've turned to friends in the new Somali government and U.S. officials at neighboring embassies to help.

Minneapolis, Minn. — The Somali community in Minneapolis is still well-networked into the homeland. Family and business ties make it surprisingly common for people to stay in touch with the social life and economy of this failed state. Somalia hasn't had a working government since 1991.
Osman Ahmed, whose 17-year-old nephew Burhan Hassan disappeared last November, has been working his contacts back home to try to find his nephew. He knows the FBI is also on the case, but he says law enforcement is mainly concerned with making sure the men don't cause harm in the United States.
Bringing people out of a war zone is another matter, he said.
"Actually, it's very tough [for] law-enforcement agencies, especially the FBI, to go back and get information from Somalia," Ahmed said. "But as Somalis, we know each other, we have a tribe over there, we have friends, we are connected to the Somali government because we supported it. So we are trying in any way we can to get information."
Ahmed reached out to a childhood friend in Somalia. His old pal Abdirashid Mohamed, is now Minister of Commerce in Somalia's new transitional government.
As the minister of commerce, Mohamed said he doesn't have any power to send the men home.
"But as a minister, I'm an influential person and I can bring the issue on the table of the council of ministers," he told MPR in a phone interview from Mogadishu.
The commerce minister admits he's not just motivated to help his old friend. He's got strong political reasons to join the search. The group the young men have allegedly joined, Al-Shabaab, is the government's main enemy. ..more..http://minnesota.publicradio.org/display/web/2009/03/30/somali_search/
Posted by Unknown at 3:21 PM